A thousand moons in a thousand rivers

Seoul, South Korea -- A full moon rose and floated in Heaven the other night. It is but one moon in the Heaven above, yet it is a thousand moons shining on the rivers and streamlets in the world below. King Sejong begins the Worin Cheongang Jigok, the “Song of the Moon in a Thousand Rivers,” with a beautiful line from Buddhist scripture. 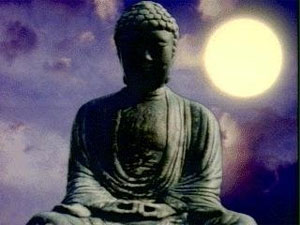 “A thousand moons in a thousand rivers” is a beautiful expression enough all by its lonesome. One thing it means is that upon hearing the same teachings, every individual receives it according to the shape of his own ear.

The teachers taught us love and compassion, but everyone adopts the teachings in his or her own way. Which is what gives you Christians like U.S. President George W. Bush, who killed hundreds of thousands of Iraqis in a war waged in Jesus’ name.

Something else the verse means is that the character of the Buddha, the “moon,” exists in each earthly being, those “thousand rivers.”

A man by the name of Jeong recently killed two children.

He joins a long lineage of frightening murderers, beginning oh so long ago with Go Jae-bong, and followed by Kim Dae-ju, U Beom-gon, On Bo-hyeon and Yu Yeong-cheol. Each time another one appears, the whole of society cries out demanding they be swiftly punished, and there is no difference between the Buddhists who are not supposed to kill and the Christians who were told to forgive seventy times over. It is an expression of emotions wanting revenge and the instinct to protect one’s family. However, even these heinous individuals are rivers in which shine Jesus and the Buddha.

However much Yu Yeong-cheol may really be a Yu Yeong-cheol, there is no way one individual can harm a thousand or ten thousand. By comparison, politicians who invoke freedom and equality and democracy start wars that kill hundreds of thousands and even millions. Similar things are true of the kind of politics that puts competition and efficiency before the common interest values of welfare and distribution. In the end, it sends endless numbers of the weak in society to poverty and suffering, so what Jeong, the murderer has done does not compare to the resulting harm. Numerous people lost their jobs, saw their families fall apart, and took their lives after the 1997 financial crisis. Does the responsibility shared by international financial capital, politicians, and government officials for that compare to On Bo-hyeon?

If my children were abducted and killed, I would never forgive the criminals. I wouldn’t hesitate to privately retaliate against the kidnappers. Who and what can console the sorrow of parents who have been so terribly deprived of their children? And what about the wounded hearts of the people who witness this? But the state is different. Unlike individuals, the nation needs to be rational, without being carried away by emotion. Even if a large number of individuals were to demand that criminals be put to death, the nation needs to say, “No.”

The rationale for this is provided by our Constitution: “All citizens have the right to dignity and value as human beings.” It is not only the saints, the wise, and the sensible who have have dignity and value as human beings, but also the inconsiderate and the murders. Brutal criminals will continue to appear as long as this world exists. The constitutional statement that says that they still have dignity as well takes us to a spiritual plane.

All of this is the result of the religious and rational enlightenment which tells us that brutal criminals, who many of us may think do not deserve to be called human, are also dignified beings, which is an emotionally difficult thing for us to accept. We should protect our society by issuing life sentences, rather than death sentences. No matter how terribly a wicked person kills another person, the nation, which should be rational, should not get its hands stained with blood. Whether good or evil, everyone has the full moon of Jesus and the Buddha in their hearts.

------------
Kim Hyeong-tae is a practicing lawyer based in Seoul. The views presented in this column are the writer’s own.