Buddhism seen through the Darwinian lens

Bangkok, Thailand -- IF STILL ALIVE, Charles Darwin would be celebrating his 200th birthday tomorrow. Such longevity, of course, is impossible for any human, and Darwin's paradigm-changing theory of evolution by natural selection, goes a long way to explain why - along with many revelations about the human condition. 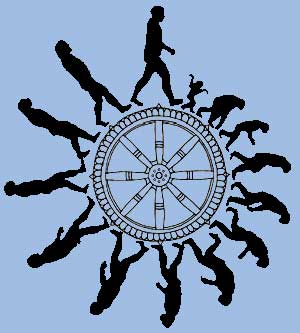 Some may object to an evolutionary perspective on Buddhism as superfluous, saying that the Buddha's two-millennia-old teachings are self-evident to the wise. But for others, a change in focus, like when looking at a Magic Eye puzzle, can reveal meaningful shapes popping out of seemingly disjointed pixels.

Unfortunately, contemporary discussions of Buddhism are little more than repeated dogma with tired formulas and clich้s. It will be a good idea, for example, to employ an evolutionary explanation of why we age to shed fresh light on Buddhist concepts such as the three characteristics of dukkha (unsatisfactoriness), anicca (impermanence) and anatta (non-self).

Literal borrowings aside, additional insights, however, can be gained from the analogy between the biological sphere and the spiritual dimension, as those familiar with the Buddhist cannon will realise that much of the Buddha's teachings are versed in similes drawn from the natural world.

In "Culakammavibhanga Sutta", the Buddha stated that, "Beings are owners of their karma, heirs of their karma; they originate from their karma, are bound to their karma, have their karma as their refuge. It is karma that distinguishes beings as inferior and superior." Some biologists, no doubt, will be tempted to replace "karma" - volition in physical, verbal and mental acts - with "genes".

Building on this analogy between karma and genes, it is possible to paint a picture of our spiritual world filled with a plethora of living species arising out of karma, much as the biosphere is inhabited by animals and plants made of genes.

As a metaphor in a "Jataka" tale, the Buddha urged his disciples to tear down the forest of spiritual defilements made of greed, hate and ignorance - the roots of all evil, according to Buddhism. He also encouraged them to cultivate the antidotes, namely generosity, compassion and wisdom. Together, these six can be thought of as making up our spiritual DNA, not unlike the four nucleic acids that spell out our genes.

Although the law of karma can be summarised as "you reap what you sow", modern minds find it hard to accept it as so. To many, there seem to be missing links between the original deeds and the final results. For example, if it's a law, who enforces it and how?

The strongest argument comes from the observed reality that, sometimes, good deeds appear punished and bad deeds rewarded. Why do corrupt politicians live happy lives while human rights defenders often get gunned down?

The Buddha often pointed out, "It is by way of elements that beings come together and unite," and raised examples of the greedy mingling with the greedy, the wise with the wise, and so on. In other words, what we are, like and do determines our company and, consequentially, the general predicaments we find ourselves in.

Here, evolution can fill in and explain that competition between living things is actually more intense within a species than between species. While hundreds of wildebeest may fall pray to predators during their great migrations, many more die from competition with other wildebeest for food and many others lose out in the competition for mates.

Such competition exists in all species. But while the evidence of it will more likely show only as stress in a herd of wildebeest, it will show more prominently in a pack of hyenas as scars. That's why the life of corrupt politicians cannot be really all that pleasant. Based on how they treat others, we can guess what kind of treatment they can inflict on one another out of self-interest. As in evolution, there's no need for a higher power to enact the law of Karma.

What about the gunned down hero? Here, one can also draw a parallel from the natural world. A bird that noisily warns its flock of an approaching hawk bears an increased risk of getting itself killed. Although it appears unjust at the individual level, one can argue that heroism cannot have evolved without the threat of danger. So the actual tragedy is expected to happen at some point. However, the survival of the rest of the flock, as a result of the heroic behaviour, ensures the multiplication of the altruistic genes. Likewise, a society that has evolved heroism is more likely to recognise and eulogise a self-sacrificing act, with the result that similar behaviours tend to increase rather than diminish.

As seen above, most stress in the biological world comes from competition for survival and reproduction. It is no surprise then that our emotional toll mostly comes, in human terms, from work and love. These are the areas where each and every one of us can individually observe whether the law of Karma holds true in the here and now, without the need to invoke past lives. Does the serpent of greed come back to bite us in the end? Do we feel an equal measure of pain when we lose the object of our joy? Does violence breed violence?

Although further insights can be made from the analogy, it's also important to note critical differences. In nature, the goal is the propagation and survival of genes. The Buddhist ideal, however, is the devolution of the ever-multiplying karma through volitional, not natural, selection. The ultimate goal is nirvana or karmic extinction - here used in the Jurassic sense rather than the traditional meaning of extinguishing a fire. Tellingly, the Buddha often referred to himself "just as a palm tree with its top cut off, incapable of growing again".

But be it karma or genes, the Buddha teaches that Homo sapiens, rather than being shackled victims, have a capacity to rise beyond the raw urges of our constituting elements. It's left for each of us to prove him right or wrong.
TOP