What being Buddhist is all about

Bangkok, Thailand -- Two weeks ago, I confessed to being confused about whether I was a Buddhist or not. Many readers have kindly emailed suggestions; some addressed issues broader than what makes a person Buddhis't. 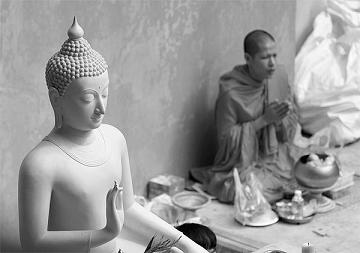 << A monk recites prayers at the opening of the Buddhadasa Indapannyo Archive Centre at Suan Rodfai near Chatuchak market, on Aug 2, 2010.

I would like to share a few salient points, although I will not be able to credit anyone specifically, as some have expressed reservations about their names being made public.

A few say that they have learned a great deal by studying the writings of Buddhadasa, while others suggest that I read also the writings of Mahayanists. They have a point.

I have been studying such writings and found them helpful, including books by Buddhadasa as well as a book by Peter Jackson, Buddhadasa: Theravada Buddhism and Modernist Reform in Thailand, which discusses Buddhadasa's take on Buddhist teachings.

Particularly helpful also are writings of two leading Mahayanist scholars _ the current Dalai Lama and Thich Nhat Hanh; their works deal with broader perspectives than Buddhism per se, especially these books: The Universe in a Single Atom: The Convergence of Science and Spirituality by the Dalai Lama, and Living Buddha, Living Christ by Thich Nhat Hanh.

I do realise that having a basic understanding of Buddhism will not do much good unless I am able to bring that understanding into my daily life. That will need considerable effort on my part.

Some readers have explained that as with all religions, when the prophets were still alive, their teachings were pure. After their passing, however, the teachings tended to be distorted by the prevailing political, economic and social conditions. One reader goes so far as to say that Buddhism has been hijacked by special interests.

Two groups have significantly influenced the development of Buddhism in Thailand. One group is intent on making money here and now, while the other wishes for a better next life or to go to heaven by donating funds for construction of Buddha statues, stupas, etc, or to monks for providing blessings and conducting rituals. Such donations are made for selfish reasons, not for charity.

The first group preys on the second by continuing to promote ever more construction and rituals. Together they have corrupted the practice of Thai Buddhists who now rarely seek thorough understanding of the core teachings and to conduct themselves accordingly _ to reduce greed, anger and ignorance or to achieve a high state of mindfulness.

A few blame the ruling class _ political and business leaders as well as the upper echelon of the Buddhist clergy _ for using Buddhism to advance their own corrupt ways or to allow the money-hungry enterprise to trap believers in a vicious circle of endless rituals and construction of ever more grand statues, etc.

I find the implications of some comments quite chilling. They specifically point out that if the value of Thai Buddhism is being questioned, is no fault of Buddhist teachings. Rather, it is the fault of the shared cultural values of Thai society. These values _ the commonly accepted standards of moral and ethical behaviour _ form the foundation of the Thai nation. The low values and the resulting weak foundation are causing a serious social illness. Political violence, rampant corruption, widespread prostitution, general disregard for the rule of law, etc, are only symptoms of that illness.

Evidence of low values should be obvious: survey after survey has shown that the majority of Thais say corruption is acceptable if they also benefit; some 85% believe that fraud is common in conducting business; the chairman of a prominent business association complains that businesses have to pay 30% of the project costs to get government contracts; or a recent article in a Buddhist journal claims that 95% of monks believe that the former prime minister who is on the run after being convicted of corruption, is a good man.

With such low moral and ethical standards, it would take a revolution in thinking and drastic behavioural changes by most Thais to prevent the social illness from festering and sinking the nation.

Two reform committees are working on this issue. Hopefully, they will soon come up with appropriate recommendations which all Thais will accept and implement wholeheartedly. Otherwise, they will have no one to blame but themselves when Thailand becomes a failed state.

--------------
Sawai Boonma has worked as a development economist for more than two decades. He can be reached at
sboonma@msn.com.