No moksha* in Thai samsara of monastic scandals

Bangkok, Thailand -- Buddhists in Thailand are usually proud of their faith - that the form of Buddhism they believe in, as one of the three cardinal national institutes, is the purest and most orthodox school of Buddhism directly passed down from the time of Lord Buddha over 2,500 years ago. It is also the land where Buddhist monks are following the strictest interpretation of monastic rules. << Dr Mano Laohavanich, as a monk known by the name of Phra Mettanando, and later as a lay Buddhist.

One of the common things that they are not aware of is the fact that in Theravada culture, news about bad behaviour of monks is easily and commonly scandalised.

Monks are seen as the highest authority in the Buddhist community to whom prestige and honour should be offered; lay people are highly generous in complying with the demands of monks.

In practice, however, it has been the lay people who brought about the scandals of monks to the public's attention. To be precise, they were acting paternalistically about the monks whom they loved and adored.

It is always a rule of thumb that as soon as a scandal breaks in the media, the first victim is the truth - the public is often confused by two contradicting stories from two groups of people who were once intimate with each other.

According to the Thai monastic tradition, monks have to follow 227 rules of monastic code prescribed by the Lord Buddha, which have made them role models of social ethics, and traditional sources of wisdom and social leadership. Traditionally, the code of monastic conduct - so-called the Vinaya - prohibits monks from most immoral activities, such as telling lies (especially about their own spiritual achievement) and killing anything, human or animal.

The prohibition extends to worldly conduct, such as having sexual intercourse, being engaged in private or public investment, roaming the streets during the night hours, drinking intoxicants, or engaged in public arguments over politics, etc.

The monastic code is seen as the heart and soul of Buddhist spiritual practice in Theravada culture. 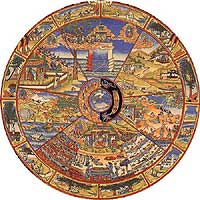 Moreover, Buddhist monks in Thailand are barred from any physical contact with any female (human or animal alike); the banned activities include even those seemingly most innocent acts such as shaking hands in social greeting, riding a bicycle, or taking physical exercise in a fitness gym. Monks who are engaged in these activities are frowned upon or criticised behind their backs.

On the one hand, the Vinaya has served its purpose in protecting Buddhist monastic community from heterodoxy and deviation from the path of spiritual purification described by the Lord Buddha, and has placed Buddhist monks at the pinnacle of the social hierarchy.

On the other hand, the monastic code has brought along points of controversy for sectarianism, especially among monks, social discrimination and complacency, most importantly in the ambivalent relationship between monks and their lay sponsors.

On the social level, the Vinaya mandates Buddhist monks to live on the sponsorship of the lay people. Robes, meals, medicine, lodging and travelling expenses and all other costs which may come, have to be provided by the lay person.

A truthful monk is believed to be detached from all worldly things, and remote from all worldly affairs, money and family included. In so doing, they are earning their sanctity, which can be seen as a kind of special power, through the purity of their practice of the monastic precepts. Hence, they deserve the best treatment and respect from their lay sponsors.

Based on the same belief in tradition, lay Buddhists are encouraged to seek out good monks who are pure in their monastic precepts as they are the ultimate field of merit. A small donation to such monks reaps them abundant merit which will assure their heavenly rebirth and happiness in the afterlife.

Therefore, the logic behind Buddhist donations is not for the purpose of purity of the mind, but to have the highest yield from their donation. Psychologically, the paternalist attitude of the lay Buddhists towards their monks is born of the instinctive protection of their own spiritual investment. Some psychoanalysts have taken further steps in analysing that the paternalistic nature of lay Buddhists develops from the "baby-like" innocent faces of monks: monks have to shave their heads regularly and this tradition has made their faces look like babies', an image which stirs the maternal instincts of lay women. This theory not only explains why the majority of attendants of monks and monasteries are women and not men, but also the maternalistic attitude of Thai women towards monks.

In theory, receiving good sponsorship and attention from the lay community should enable monks who are strict to their precepts, to be closest to nirvana or enlightenment.

However, few Buddhists accept that the 227 rules are not up-to-date, and all Buddhist monks are just human beings who have desires and face temptations. The fact is that their temptation naturally increases with the amount of donations they receive. Consequentially, money brings further opportunity for power and social prestige. Being faced with more temptation, most of them give in to it. As a result, the monks who are faithful to the precepts become unfaithful and spoilt. Hence, when they make mistakes, they are criticised by their lay sponsors who gradually fade away to search for another new field of merit-making. This develops into a vicious cycle in Theravada society, especially in Thailand, which is dominated by capitalism.

The situation is much more complicated in the case of charismatic monks. Their charisma and social prestige have turned the monastic precepts into challenges. The 227 rules and traditional taboos in Buddhist monasticism become juicy personal rewards once they are violated. They feel triumphant as they have become the exception to the norm in society.

The system of the ecclesiastical administration in Thailand is surely responsible for this moral decadence. It is over-centralised and feudalistic. Besides, there is no room for lay people to file any accusation against any monk, except to report the wrongdoing to their senior authority, in the hope that they will receive justice.

In reality, the system is highly conservative, infested with nepotism and cronyism. There have been many cases of high-profile, charismatic monks getting away with their wrongdoing. Disappointed by bad news about their monks, many lay Buddhists do not give up, they simply go in search of a better field of merit for their own good. As a consequence, more good monks are faced with more worldly temptations.

Educated Buddhists in Thailand are therefore looking forward to a radical reformation of the ecclesiastical community, to put an end to this endless samsara of scandal. But their goal seems virtually remote and far-fetched. In reality, there is no political party or leader in the government who is brave and smart enough to solve the problem in Buddhism.

-------
Dr Mano Laohavanich has spent more than two decades in the Buddhist monkhood.

* moksha, sanskrit for "liberation from the cycle of death and rebirth"