Instantaneous Being - A Buddhist Logic

Singapore -- The Buddhist logician agues, that there are only two ways in which we can obtain our knowledge, through our senses and our understanding, i.e. one non-intelligible and the other an intelligible source. Just as there are two source of knowledge, the external world is also double it is either the Particular or the General. 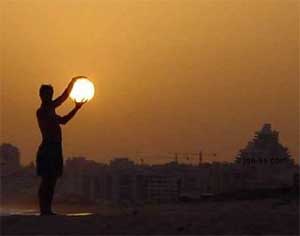 The Particular is the object corresponding to our senses cognition and the General is the object corresponding to our understanding or our reason. Example; ‘This is a cat’. ‘This’, would represents the ‘Particular’ perceived by the senses, ‘Cat’, would be the ‘General’ after our intellect has process the information and arrive at the conclusion of what ‘This’ is. Thus we have a double world, one from our senses and the other, a thought constructed one, the intelligible.

Also, what is percept by the senses are momentary flash of energy only. The permanent, eternal Matters are imagined. All things without exception have the character of being instantaneous, of being spit in discrete moments, and they disappear as soon as they appear. Even the simple stability of our everyday objects is something constructed by our imagination. What is ultimately real in this world is instantaneous.

Everything, necessary must have an end, whether it is a knowledge deduced by observation or by deduction without the help of our sensory experience. We would have notice by observation, that such thing as fire, changes every moment, so do our thoughts, even our body is constantly changing, and by a broad generalization, not just the body, but everything, is older by a moment in every succeeding point instant. There is no need of thing to be dependence on special cause for it to end, as if that is the case, then we would have empirical objects which never would have an end and would have an eternal existence.

Existence, real existence means efficiency, i.e. it has to keep producing an effect, meaning it has to change at all time. What is absolutely changeless is also absolutely non-efficient and does not exist. To be static means to be motionless and eternally unchanging. Not to be static means to move and to change every moment. There is motion always going on in living reality, but of this motion, we notice only some special moments which we stabilized in imagination. The deduction is that, change is existence, what does not change, does not exist.

Buddhist Logic does not claim to know about the transcendental. It only deals with the phenomenal world and how we can make senses of what is going on around us. The understanding of its logical explanation should give us a better grasp and knowledge of some of the Buddhist teachings, such as impermanence, causation, and no-self.