Udon Thani, Thailand -- THAILAND lost one of its most revered monks recently but even in death, Luangta Maha Boowa Yanasam­panno has continued to do good for his country. 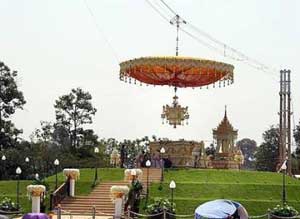 Donations given at his funeral on March 5 totalled more than 330.5 million bahts (RM33mil) in cash and cheques, plus about 78kg of gold.

Luangta Maha Boowa, the abbot of Wan Pa Baan Taad in Udon Thani’s Muang district, came into the limelight when he initiated a fund-raising campaign to help the country recover from the effects of the 1997 financial crisis.

“When the economic crisis hit in 1997, I stepped in to help lift the nation from the depths of darkness, that is, from greed on one level of society and from poverty on the other. I wanted Thais to focus on the causes of the crisis so that, by knowing the causes, they could change their behaviour to prevent such an event from recurring. So I used the Help the Nation campaign not only to raise gold for the national treasury, but more importantly as a means to spread Buddha’s teachings to a broader section of Thai society in an age when many Thai people are losing touch with Buddhist principles,” said Luangta Maha Boowa in the booklet, Samana – Maha Boowa Memorial Book, which was distributed after his death.

Luangta Maha Boowa was born on Aug 12, 1913, as Bua Lohitdee to a wealthy farming family.

He said he was told by his mother that of the 16 babies she had carried in her womb, he was the one who gave her the most to worry about.

“I was either so still in her womb that she thought I must have died, or I was kicking so hard she thought I must have been on the verge of death. The closer to my birth, the worse those extremes became. Just before I was born, my mother and my father each had an auspicious dream. My father dreamt that he had received a very sharp knife, pointed at the tip with an elephant tusk handle and encased in a silver sheath. My father felt very pleased. 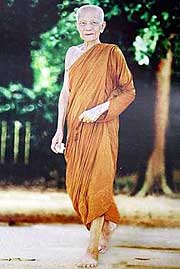 << Good man: The late Luangta Maha Boowa is remembered as a simple and humble monk who did not seek personal gain.

“My mother, on the other hand, dreamed that she had received a pair of gold earrings which were so lovely that she couldn’t resist the temptation to put them on and admire herself in the mirror. The more she looked, the more they impressed her.”

He said his grandfather interpreted the two dreams to mean that the course of his life would follow one of two extremes. “If I chose the way of evil, I would be the most feared criminal of my time. My character would be so fearsome that I was bound to end up being an infamous crime boss who’d never allow himself to be captured alive and imprisoned, but would hide in the jungle and fight the authorities to the death.

“At the other extreme, if I chose the way of virtue, my goodness would be unequalled,” he said in the memorial book.

He became a monk at the age of 21 and was a student of Luangpu Man Phurithatto, one of the most renowned Buddhist meditation masters in Thailand’s Buddhism of the Forest Tradition. His followers believe that he was an arahant, a living Buddhist saint.

It is well-known that Luangta Maha Boowa would always go without food as he said it helped with his meditation.

His thousands of disciples and followers see him as a diminutive, simple and humble monk who did not seek personal gain. To them Luangta Maha Boowa was also an arahant – one who has perfected wisdom and compassion like Bud­­dha and is no longer subject to rebirth.

In the memorial book, Luanga Maha Boowa said he had tried his utmost to help society: “Within my heart, I have no sense of courage and no sense of fear; no such thing as gain or loss, victory or defeat. My attempts to assist people stem entirely from loving compassion. I sacrificed everything to attain the Supreme Dhamma that I now teach. I nearly lost my life in search of Dhamma, crossing the threshold of death before I could proclaim to the world the Dhamma that I realised. Sometimes I talk boldly, as if I were a conquering hero. But the Supreme Dhamma in my heart is neither bold nor fearful. It has neither gain nor loss, neither victory nor defeat. Consequently, my teaching eman­ates from the purest form of com­­passion.”

Luangta Maha Boowa forbade his followers from spending extravagantly at his funeral. In the interview with Nanfa – The Tiger Temple Magazine (produced by Wat Pa Luangta Bua Yannasampanno Tiger Temple, Kanchanaburi Province) in 2009, he said he did not want gifts donated to him for merit while his body was in a casket. 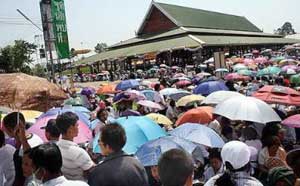 Devotion: Despite the sweltering heat, a large crowd turned up for the cremation of Luangta Maha Boowa at Wat Pa Baan Taad  >>

However, he said it would be appropriate if the gifts were for the honour of the country and the benefit of the people.

Luangta Maha Boowa passed away on Jan 30 at the age of 97. He was suffering from intestinal and lung infection for more than six months before he agreed to seek treatment at a hospital.

Buddhist devotees and monks from across Thailand made their way to Wat Pa Baan Taad to pay their last respects when news of his passing spread. Many camped at the temple ground for days.

His body was placed in a refrigerated coffin behind a mortuary urn and groups of visitors were allowed to visit for three minutes per session.

A three-day funeral service under royal patronage was held from March 3 at the temple.

Some of my Buddhists friends and I had the opportunity to meet Luangta Maha Boowa during a dana (alms giving) visit to Wat Pa Baan Taad in 2004.

The monk came across as a very compassionate person, though we were warned that he was a very strict and serious teacher, and that the monastery was solely a place for meditation.

Luangta Maha Boowa commanded great respect among his followers and any food left over by him would be immediately snapped up as soon as he had left the sala (open pavilion for meetings).

Wat Pa Baan Taad was set up by Laungta Maha Boowa in 1950 after he returned to Udon Thani to look after his mother who was ill. Villagers and relatives appealed to him to settle in the forested area south of the village. They donated 16ha of land to him to start a monastery. Luangta Maha Boowa accepted the offer after considering that he would be able to look after his ailing mother.

To pay our last respects to Luangta Maha Boowa, we took a 600km coach ride from Bangkok to the temple. When we arrived on March 5, the temple grounds were teeming with people.

Some 1,500 alms houses were set up to provide free meals to the thousands who had turned up to pay their last respects.

Thousands of police and army personnel were present to ensure security.

Buddhist devotees crowd around the sala and cremation site through­out the day under the scorching sun. Many had been there the previous day.

At 5.15pm, the mourning crowds observed in silence as Queen Sirikit proceeded with the ceremony by offering 10 sets of saffron robes to senior monks, and placed sandalwood and flowers in the crematorium. After that Princess Chulabhorn placed the funeral bouquet, follow­ed by 99 senior monks and VIP guests before general monks and members of the public were allowed to place funeral bouquets at designated spots around the crematorium.

The actual cremation took place at 6pm, shortly after the queen had left.

It is estimated that up to one million people attended the cremation ceremony.

Those who attended the funeral received mementoes ranging from amulets to pictures and booklets.

Many stayed overnight and joined the alms-giving and ash-collecting ceremony which was held at midnight.

Luangta Maha Boowa’s ashes were kept in a metal box which was locked by eight master keys for security. Eight revered monks held one key each.

The ashes were divided into two portions: one portion was distributed among various forest temples, and the other, placed in a golden urn and kept at Wat Pa Baan Taad.