Seoul, South Korea -- Religion has improved the quality of spiritual life of human beings and influenced societal development for a long time through various moral roles in the public sphere by giving ethical inspiration to civil society activity and political discussion. 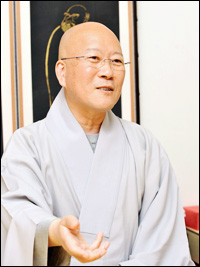 << Zen-Master Subul, head of the Anguk Zen Center, speaks during an interview with The Korea Times.
/ Korea Times photo by Shim Hyun-chul

Zen-Master Subul, head of the Anguk Zen Center, stresses the very essence of Buddhism, particularly Seon (Zen) Buddhism — the spiritual guidance — to show people the right direction with a balance between materialistic and spiritual civilizations.

To commemorate Buddha’s Birthday which falls today, Master Subul, who puts the Buddha’s teachings into practice, talked about his vision on Seon Buddhism through “ganhwaseon” in an interview with The Korea Times. Ganhwaseon is a traditional way of Seon meditation in which the main practice is to investigate “hwadu” in order to attain enlightenment toward True Nature.

Q: What is the purpose of ganhwaseon and why is it so important for people living in modern society?

A: The ganhwaseon meditation training is to help people attain enlightenment from ignorance and elevate them from reality to a higher level of another world. In the past, ganhwaseon trainings were done mostly by Buddhist monks in deep mountains of the remote places and deemed as the difficult method that laymen can hardly follow. But as we brought the meditation centers to the hearts of the urban areas, now people from all walks of life can take part in Seon meditation and have more opportunities to find their true self. This is a very voluntary practice to attain freedom within ourselves. The center is open to all the people. Through meditation, people can develop their own perspectives which are able to see the directions of where we should go. We want to pass the traditional meditation method earned by our ancestors to the next generation.

Q: Compared to Japan’s Zen and China’s Chan, Korea’s Seon is less known to the world despite its time-honored tradition. What do you think about it?

A: Although many foreigners experience Korean Buddhism through the temple stay programs, the world’s academic circles still think of Chinese “Chan” or Japanese “Zen” first but still remain unfamiliar with Korean “Seon.” But Korean Seon Buddhism preserves the original form of the traditional Buddhism than any other world. Unfortunately we didn’t have an opportunity to let it be known to the world like Japan which did it 100 years ago. Now it is the right time to promote our Seon culture to the world. Actually, last year, Dongguk University held an international seminar titled “Ganhwaseon, Illuminating the World” by inviting world-renowned scholars. They participated not only in the academic seminar but also in the actual experience practice of ganhwaseon. New Hampshire University professor and Buddhist monk Ven. Hyemin and Robert Buswell, professor of Buddhist Studies of UCLA took part in the conference. They went back home with our meditation method. That’s a starting point to globalize ganhwaseon. Many Seon practitioners have made the efforts to bring enlightenment by preserving Buddhist teachings to the world in their own ways. We’re late but I am sure there will be a change in perception of the global understanding of the Korean Seon Buddhism.

Q: To materialize globalization of “ganhwaseon,” what kind of the efforts should be made?

A: First of all, we should establish our identities before letting it become known to the world. Seon meditation has been deeply rooted in our spiritual foundation and has persisted through ups and downs in our history. The culture has shaped our mental and world views for Koreans regardless of whether they are Buddhists or not. That’s an integral part of Korean traditional culture and also the portrait of what we Koreans are now. So we have to perceive our true identity rooted in Buddhism and then get it to the world. Ganhwaseon has unique characteristics of Korean Seon Buddhism by giving a short, clear answer to questions about the quest of truth and suggests a way to live in confidence with freedom.

Q: What do you think about the role of religion, particularly Buddhism in our society?

A: Religion in any kind has influenced human beings in many ways. The current civilization built up through science and technology is at the peak of development at a stunning pace in the human history. All these achievements are possible because of the role of religion. Religion has played an important role to strike the balance between the materialistic and spiritual civilizations to prevent chaos and confusion ensuing scientific, economic and technological progress. Religion is a spiritual leader for human beings by showing the direction of where they should go. Religious leaders sometimes aggressively engage in social and political movements when the nation is driven into confusion and difficulty. But after society is back on track, religious leaders should be also back to their original duty as a spiritual guide. We should help the suffering people achieve a comfortable life and make them content with their life. That’s what we are doing as a religious leader. Ganhwaseon is the process of achieving this kind of duty. The meditation is making people open their eyes to the values of human beings regardless of religion. The religion shouldn’t be a purpose. We should ask the core nature of religion.