Ho Chi Minh City, Vietnam -- Thich Tri Anh is a 60-year-old monk who has spent the last 40 years bringing up more than 50 orphaned and disadvantaged children in Ho Chi Minh City, providing them board, lodging and education. 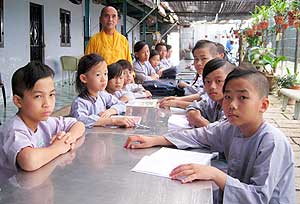 Monk Thich Tri Anh is head of the Dien Tho Pagoda in District 12. SGGP reporters travelled more than 25 kilometres to meet him at the Pagoda. Children rushed across the yard and clasped their hands to greet the reporters. Monk Thich Tri Anh has taught all the children the importance of always being polite.

The reporters were invited into the house where monk Thich Tri Anh offered them water and talked about the many difficulties in running an orphanage, though there was great satisfaction in doing so.

Monk Thich Tri Anh had started adopting orphans and disadvantaged children in 1984. At that time, he was staying with some monks in their Pagoda because he did not have his own. Later donors bought him 300 meters of land to build a pagoda.

When people around the pagoda heard that the monk had adopted orphans and disadvantaged children, they began to send him their support in any way they could.

Although it was economically difficult, monk Thich Tri Anh has tried to send all his sons to school. The oldest adopted son is nearly 40 years old and has a master’s degree and the youngest son is presently studying in kindergarten.

He was thankful to donors across the country that his sons were able to go to school and grow up into good human beings.

He said that the most pitiable case was Trinh Thanh Phuc, who was abandoned when he was a three-month old baby. His mother abandoned him at the Phuoc Hue Pagoda in Quang Ngai Province. A nun sent Phuc to monk Thich Tri Anh who took care of him. The monk believes that every person has his own fate.

Another child, Quang Ha, was adopted five years ago. He was abandoned at a motel when he was six-months old. He was suffering from severe malnutrition when people sent him to the monk. At that time, monk Thich Tri Anh worried about his health. However, with love and attention Quang Ha soon recovered to normalcy.

Nguyen Huy, the oldest of the monk’s sons, said that monk Thich Tri Anh was their father who taught them to love each other and share their difficulties together.

The monk is now aging so it is time for the sons to take care of him, Huy said. He said that he and his brothers would stay in the pagoda to rebuild it and help other children in need.

Thanks to the love and attention of the monk and donors, the orphans and disadvantaged children have now a bright future and a better life.

Whatever they do and wherever they go, those who grew up in the pagoda frequently come back to visit monk Thich Tri Anh, who has transformed their lives from misery to happiness.