Los Angeles, California (USA) -- I first met Bhante Sumangala when he moved to Los Angeles exactly three years ago. He had been invited to become a resident monk at Dharma Vijaya Buddhist Vihara by its Abbot, his former classmate Ven. Walpola Piyananda. Bhante Sumangala and I have since become close friends. His knowledge of the Dhamma is vast, and his lively sense of humor draws people to him like a magnet. 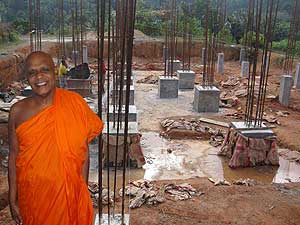 It wasn’t until this past year that I learned about his dream – at least the final phase of a twenty-year dream that is slowly becoming a reality: a 91-foot-high Buddha statue in the Kalutara District of Sri Lanka. This statue will be the finishing touch on the Sri Lanka Nippon Buddhist Center, which Bhante Sumangala founded in 1992.

The back-story of this dream is very interesting. In 1978 Ven. Sumangala received a scholarship from the Government of Japan to do post-graduate studies. He went first to the Osaka University of Foreign Languages where he mastered Japanese in just six short months. Then he went on to complete his advanced degree in Buddhist Studies at Otani University in Kyoto – in the Japanese medium, no less.

In 1986, with the on-going help of Japanese friends, Ven. Sumangala founded the Sri Lanka-Nippon Educational and Cultural Center in Kotte, Sri Jayawardhanepura. He still serves as Director of this charitable organization, which has given scholarships to more than 10,000 Sri Lankan students.

He stayed in Japan for a total of twelve years and taught the Dhamma to the Japanese people – in countless classrooms, lecture halls, temples, and other venues. He is still in touch with many of his friends, former students, and disciples in Japan, and is relieved that he lost none of them in the recent tsunami disaster. Like all Buddhist monks performing dhammaduta activities, he lived off of the donations he received from generous patrons and devotees.

As it turned out, he lived extremely frugally in that famously-expensive country, and he saved most of the money he was given for his dream back home.

In 1991 he returned to Sri Lanka so he could take care of his teacher, the late Ven. Opata Saranankara, whose health had failed. Bhante Sumangala looked after the monk who had raised him since his ordination for several months until his death. Right about that time a generous Sri Lankan friend donated land to Ven. Sumangala in the village of Meegahatenna, which is about 25 miles inland from the ocean at Kalutara. He built a building on the site that first year, laying the foundation for his dream.

The money Bhante Sumangala had saved in Japan was put to good use, and the Sri Lanka Nippon Buddhist Center was operational by 1992; by 1993 he had a Sunday School and a Montessori kindergarten up and running. Lack of space soon became an issue, so he built additional buildings for the facility in 1995.

In early 1996 the local Member of Parliament for the area, the Hon. Kumara Welgama (now the Minister of Transportation), paid Ven. Sumangala a visit and asked him to establish a vocational training school at his Center; this would be just one of many around the country that the Hon. Mahinda Rajapakse would commission during his tenure as Minister of Labor. Ven. Sumangala rose to the occasion, donated one of his buildings for the new school, and prepared to start classes. The Hon. Minister Mahinda Rajapakse attended the opening ceremony in August of 1996, and since then the vocational school has graduated over 2,000 students who are now employed in various trades.

Bhante Sumangala managed the Buddhist Center, vocational training school, and Educational and Cultural Center until 1998 when his friend, Ven. Panilla Ananda, asked him to move to Houston, Texas, to join the lone monk there who had just established the Houston Buddhist Vihara.

He stayed in Houston until 2006 and helped the temple grow, while at the same time returning to Sri Lanka every year to oversee the organizations under his direction. Back in residence at the Buddhist Center in Meegahatenna, he immediately went to work on a new dagaba, and His Excellency Mahinda Rajapakse, by then the President, was chief guest at its dedication on January 2, 2006.

This brings us to the 91-foot-high seated Buddha statue. Since the very beginning, Bhante Sumangala’s vision for the Center has always included such an image, and construction has recently begun. It will indeed be a grand, imposing monument when it is finished. A large meditation hall with 12-foot ceilings will be the statue’s base, and thanks to a Japanese devotee who purchased the adjacent land, a landscaped park will rest under the statue’s watchful gaze.

Bhante Sumangala knew he didn’t have all of the funds he would need to complete the statue when he started construction, but he has the faith to know they will come. He hopes to complete it within two years, and have the dedication on Vesak Day, 2013.

Here in the US we are raising funds to help this remarkable, dedicated, industrious monk realize his vision; former students in Japan are doing the same thing. If any readers would like to help, please contact Ven. Sumangala directly at sumangalathero@yahoo.com. I know my friend will be grateful for any assistance that would help him complete his dream.