From Greenwich artist to Buddhist nun

Greenwich, CT (USA) -- Kaz Flanagan could be living a comfortable life, complete with air conditioning, clean water and a computer at the ready. 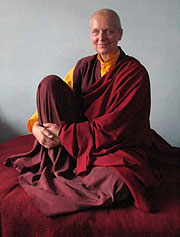 Instead, the Greenwich native has embraced the simple life of a Buddhist nun, living in the Indian city of Dharamsala, home of the current Dalai Lama, Tenzin Gyatso, and the exiled Tibetan government.

Several years ago, Flanagan took novice nun vows in Lumbini, Nepal, and has been a fully ordained female Buddhist monastic since 2008. Her brown bob is now gone, and she prefers her crimson robes to street clothes, even for a trip to the supermarket when she is back in Greenwich.

Flanagan, 58, whose given name is Debra Kathleen Flanagan -- she took Kazmira as an art name, and had it legally added as an "also known as" several years ago -- discovered Buddhism in her 30s. While she was working as a freelance graphic designer in Winter Park, Fla., a colleague of Flanagan's who had problems with alcohol took major steps to turn around her life. At the heart of those changes was her practice of Buddhism, and Flanagan said her interest was piqued.

"You can't ignore that once you see someone make an incredible change," said Flanagan during a recent phone interview from India.

Flanagan practiced the Japanese form of Buddhism intensely for 15 years, spending mornings and evenings reading the Lotus Sutra and chanting a mantra. About 10 years ago, she began gravitating toward the Tibetan tradition, after meeting the Dalai Lama.

As an artist, Flanagan began painting portraits of celebrities, and had decided to go to a dinner that the Dalai Lama was attending in New York City, thinking she might approach him about a sitting. That never happened. Instead, Flanagan said, she "shook his hand, (and) it changed my whole life."

"It would be the same as if a Catholic was able to go up to the pope and shake his hand," Flanagan said.

Flanagan eventually decided to travel to India to work with the religion's major teachers.

In the U.S., "if a teacher comes to us, maybe I can get five minutes of his time," Flanagan said.

Eventually, she decided to devote herself even further. Full ordination for women is not available in the Tibetan tradition, so Flanagan took her full vows in the Chinese Pure Land tradition of Buddhism in Taiwan.

Flanagan is currently on her seventh trip to India, where she gets up at 4 or 5 a.m. each morning and practices for an hour and a half. Later, after breakfast and household chores, Flanagan spends her afternoons in language classes and then two to six hours practicing.

Tibetan Buddhism has many different kinds of practices, some of which include chanting and music. Flanagan has embraced the Troma Nagmo Practice of Chöd, the very first practice of which was attributed to Machig Labdron, a female Buddhist master who lived in Tibet in the 11th and 12th centuries.

As Flanagan describes it, Chöd is a healing practice that combines Buddhist meditation with ancient Tibetan-Siberian shamanism, and is sung to the accompaniment of drum, bell and a human thigh-bone horn.

"In the ritual, one offers one's own body, our most precious possession, as a feast for hungry ghosts, spirits and the damned, as a blessing for all souls lost on the wheel of existence," Flanagan explained via email. "The selflessness of the practitioner's compassion, contact with spirits of the nether-world, and the making of oneself into a vehicle of healing -- all becomes a path towards true awakening."

Flanagan said the practice has a special appeal for women because it was founded by a female saint.

"It's a very powerful practice, and the one reason it was suitable for me is I became somewhat of a feminist when putting on these robes because entering into the Tibetan culture, I was so amazed at the inequality," Flanagan said.

In India, the Tibetan leaders are all men, and the nuns live in houses that are a fraction of the size, Flanagan said. Financial donations are used almost exclusively to support and educate men in large, well-endowed monasteries.

While in India, Flanagan's goal is to publish an English translation of the 923-page Troma Nagmo for Western practitioners. She expects it will take five to seven years for her to fully translate it into English, and collect all the available recordings and materials that go with the practice.

"I want to know it myself," Flanagan said.

She is hoping that, in the Buddhist tradition, residents from her hometown will contribute financially to her mission, helping with her meager $6,000-per-year living expenses.

Lori Laughren, a Grandview, N.Y., resident who has sponsored Flanagan's religious retreats and studies since 1998, said she thinks her friend's latest mission is "wonderful."

Her father, Joseph Flanagan, who still lives in Greenwich, said he has long admired the Dalai Lama -- who is visiting Washington, D.C., from July 6 to 16 for an 11-day peace rally -- and he could see how his daughter would be inspired by him.

"I was surprised that she was able to stick with it because there (is) a tendency, in some of the Buddhist areas, to look at women in a more secondary fashion," he said. "It was very difficult for me to imagine her being so involved. I just thought after a while she'd say, `To hell with it,' but that hasn't been the case."

Despite the obstacles on the other side of the world, Flanagan says it's harder for her to practice in the U.S. There's a culture shock, especially in Greenwich. Flanagan said when she wears her robes in public here, she gets strange looks.

Still, many people in Greenwich, New York City and Hollywood are well aware of Buddhism, and many celebrities are big financial supporters.

"I have hope," Flanagan said. "I really have hope for that."