A spiritual leader expounds on his ideas for finding true contentment in life.

Petaling Jaya, Malaysia -- HAPPINESS has to come from within us. When a jolly monk says this, people tend to listen. 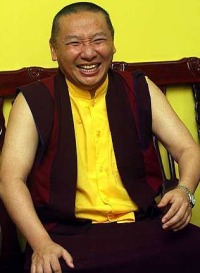 << Jolly monk: If you want to be happy, look within, advises Zurmang Gharwang Rinpoche.

Gharwang Rinpochea, a Tibetan Buddhist monk from Sikkim, India, who heads the Zurmang Whispering lineage, was in Malaysia recently to talk about joy and how to achieve it in our busy modern lives.

In an interview after the talk, he jovially declares: “I’m happy with who I am now, with my life. I try my best every day, give my best shot and have low expectations.”

So when things turn out better than expected, he says, “I rejoice. I feel so happy! It’s better than I expected.”

The Rinpochea, 46, shares how the small nation of Bhutan was once one of the happiest countries on earth.

“The Bhutan government declared that the Gross National Happiness (GNH) index, not the Gross Domestic Product index, would be the measure of success in their country.

“In an attempt to preserve GNH, the government restricted tourism and didn’t even allow television or Internet services. For a long time, happiness levels were very high.”

In 2000, Bhutan’s king allowed television and Internet services into the country and the Bhutanese discovered an entire world they had never known before.

Since then, says the Rinpochea, happiness levels in Bhutan have declined severely as the people continually compare their meagre existence with the materialistic lives of people in more developed nations.

It’s unrealistic to have high expectations, he says, to impose a lot of standards in your life and compare your situation with other people’s.

“That’s the biggest problem. It will always make us unhappy because someone, somewhere, will always be better off than us.

“There are people who do not have anything, they have nothing – and they’re happy.

“When you visit workers from Nepal and India (the Rinpochea visited some construction workers at his monastery) at night, you find that they’re singing, drinking and dancing.

“They are enjoying their life so much. They don’t have high expectations, they are living for today and from moment to moment.”

Besides, having a lot of things isn’t guaranteed to bring you contentment. Says the Rinpochea, wealth, power and fame contributes only a fraction, “5%”, towards happiness: “In the United States, salaries have steadily increased since the 1940s but the happiness level hasn’t.

“Wealth doesn’t bring happiness. Happiness comes from within you,” he repeats.

And you can find that joy inside by learning to love yourself: “When you truly love yourself, you don’t want to be anybody else. You stop comparing with others. You will be happy at any income level and you will have true confidence without narcissism.

“When you truly love living, you’re able to find beauty and happiness in even the smallest moments. You’re able to enjoy life on a moment-to-moment basis.”

And when you truly love others, the Rinpoche adds, it comes through in your words, your actions and your smile.

“People will naturally like to be around you and forming social connections is easy.”

This in turn will further feed your own happiness.

All this advice comes from hard-earned experience – for Gharwang Rinpochea himself had to learn to accept his lot in life and love who he is.

He was born into an aristocratic family in Gangtok, Sikkim. His mother was Princess Sonam Peden Namgyal, but he was recognised as the next reincarnation (the 12th) of the Zurmang Gharwang lineage while in his mother’s womb.

The Rinpochea thinks his mother was not happy when she learnt that she had to give up her son to the monkhood.

“When I was seven days old, my parents reluctantly surrendered me to the monkhood,” says Rinpoche, who recollects that he was sent to live with his paternal uncle.

He still had a regular childhood and could play with his uncle’s five sons. But he also had a “personal trainer monk”. When he was 11, Rinpoche entered the monastery; at 15, he took his vow of celibacy as a novice monk.

He went on to study under many great Buddhist scholars and travelled extensively in Asia, America and Europe, expounding on Buddhist teachings. He was awarded the keys of the city by the governor of Los Angeles in recognition of his works in promoting harmony and humanity.

In 1992, Gharwang Rinpochea founded the Zurmang Kagyud Buddhist Foundation, a non-profit international charitable organisation that has been involved in setting up homes for the aged and building roads, schools and clinics in deprived areas. The foundation has also established various Buddhist centres such as institutes for higher learning, retreat centres, monasteries and nunneries. Over the years, Rinpochea has set up centres in Singapore, Hong Kong, Taipei, Kuala Lumpur and (in Indonesia) in Jakarta, Medan, Surabaya and Pekan Baru.

Rinpochea also writes in his free time. He has authored 10 books, including Seven Points Mind Training (on meditation), Essence Of The Buddha, Opening The Door To Dharma and Teaching On Bardo (teachings on living and dying).

Currently, while lecturing in America, he is taking an intensive English Language programme at Harvard University in preparation of eventually gaining a degree either in comparative religion or environment studies – yes, the monk is green! He plants “a few thousand trees every year” and educates the monks at his monastery on not throwing garbage everywhere, using less plastic, and saving trees.