Mingyur Rinpoche, the millionaire monk who renounced it all

Bodhgaya, India -- On first impression, Mingyur Rinpoche seemed to have everything well set up for a high profile career as a globe-trotting meditation teacher in the Kagyu tradition of Tibetan Buddhism. The youngest of three sons of the late, much venerated Tulku Urgyen, by the age of 36 he had a bestselling book (The Joy of Living) to his name, a monastery in India and Tergar, an international organisation based in the US with branches worldwide. 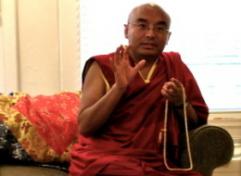 Mingyur Rinpoche was living comfortably with a retinue of attendants. He was in high demand as a teacher and admired by developed world devotees in particular, for his interest in the scientific implications of meditation – specifically its effect on brain function and the nervous system. He already had 10 years of solitary meditation retreat behind him and Tibetan Buddhist aficionados were impressed with his personal qualities.

But Mingyur Rinpoche was not content to rest on his laurels. Nor was he interested in becoming yet another celebrity guru, living in luxury and spoiled by the adulation accorded to important lamas. One morning in June this year his attendants knocked on the door of his room at his monastery in Bodhgaya, India, and when there was no response they went in to find it empty – except for a letter explaining that he had left for an indeterminate period to become a wandering yogi, meditating wherever he alighted in the Himalayas.

"He took no money, and no possessions," explained his brother Tsoknyi Rinpoche. "He didn't take his passport, his mobile phone or even a toothbrush."

In his letter Mingyur Rinpoche said that from a young age he had "harboured the wish to stay in retreat and practise, wandering from place to place without any fixed location". He advised his followers not to worry about him, assuring them that in a few years they would meet again. To this day no one has any idea of his whereabouts and he has not been in touch with his family.

Mingyur Rinpoche (the title Rinpoche means Precious One) left on his journey from Bodhgaya, the place where the historical Buddha Siddhartha attained enlightenment.

"There's an interesting parallel with the Buddha," says Donald Lopez, professor of Buddhist and Tibetan studies at the University of Michigan. "Since the fall of the Tibetan monarchy in 842, incarnate lamas have served as a kind of aristocracy in Tibet, so a high-ranking tulku is not unlike a prince. Mingyur Rinpoche has renounced royal life, just as Prince Siddhartha did. This radical step that he has taken is essentially a return to the lifestyle that the Buddha prescribed for all monks."

The life of a mendicant monk may have been a viable option for followers of the Buddha in 400BC India and for Tibet's great yogi Milarepa, but among Tibetan tulkus (incarnate lamas) it is virtually unprecedented in the present day. Mingyur Rinpoche's disappearance was greeted by the Tibetan Buddhist establishment with a mixture of astonishment and awe, accustomed as they are to many young tulkus heading off to America in search of fame, fortune and an extravagant lifestyle. They follow precedents set by an older generation of lamas like the late Trungpa Rinpoche, who made no secret of his fondness for vodka and the pleasures of the flesh, and more recently by Sogyal Rinpoche, a notorious womaniser.

Long retreats have become established among western Tibetan Buddhist practitioners, but they usually take place at secure locations and are conducted on a group basis. They are also expensive – especially for people who have to put their careers on hold in order to take part. So is it likely that more aspirant yogis and young lamas will follow Mingyur Rinpoche's example?

"We see his decision as very positive," says Cortland Dahl, the director of Mingyur Rinpoche's organisation Tergar. "It's an inspiration. You read about people doing this in the past, but no one seems to want to do it in this modern age."

Dahl points out that it must have taken some courage: "Rinpoche suffered from panic attacks when he was a child and there he was, heading off into the unknown in Bihar – one of the most bandit-ridden states in India."

The British yogi-lama Ngakpa Chogyam, however, does not fear for Mingyur Rinpoche's wellbeing:

"Religious mendicancy is understood in the Himalayan regions – but it is probably only viable for Tibetans and Indian sadhus. I imagine that Mingyur Rinpoche would be likely to find sponsors wherever he went. The main problem he might face would be people wanting to do too much for him – and he would probably have to spend some time escaping from generous benefactors."

Cortland Dahl says Mingyur Rinpoche is not only uninterested in fame and money, he is also a "pure monk" who maintains vows that include celibacy. He has this in common with a small number of young tulkus – including Kalu Rinpoche and the 17th Karmapa Orgyen Trinley Dorje. It seems as if Tibetan Buddhism might be at a turning point – away from widespread allegations of corruption and towards a revival of the principles laid down by the historical Buddha.