by Harish Singhal and Paul Chaffee, The Interfaith Observer, October 14, 2011

New Delhi, India -- Approximately 2280 years ago, Emperor Ashoka, third regent of India’s Maurya Dynasty, ascended the throne. This Iron Age family ruled India’ first empire, stretching from eastern Iran to Burma, including most of Afghanistan, Bangladesh, India, Nepal, and Pakistan. Scholars dispute the details but agree that Ashoka ruled for about four decades in the middle of the third century BCE. 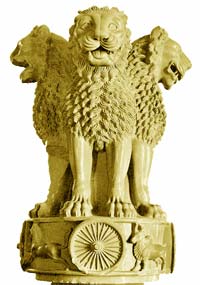 Once in power, Ashoka proved a tyrant. Growing up in the Kshatriya warrior caste, the young prince had burnished his reputation as a fierce, merciless fighter and hunter. Though one of the youngest of King Bindusara’s many sons, he proved his father’s best protector, mastering both negotiation and an iron fist for keeping the hinterlands quiet. He out-maneuvered his brothers, who perished by his hand, and developed strong enough allies in the court so that when the king died, father’s succession wishes were upended and King Ashoka took over. For most of the next decade he marched his armies through west and south Asia, becoming the most powerful, fearsome man on Earth.

Eight years into his reign Ashoka fought a bloody war to conquer Kalinga (roughly equivalent to the state of Orissa today), a small, sophisticated kingdom that had kept its freedom and had a significant army. It had no chance, though, against Ashoka’s military machine. “One hundred and fifty thousand were deported, one hundred thousand were killed and many more died (from other causes),” the king later confessed.

Ashoka’s conversion story after Kalinga is nearly unprecedented in the annals of religious history, though one comparison comes to mind. Several hundred years later a Jewish leader, Saul of Tarsus, was converted on the road to Damascus and became known as St. Paul, the point-person for spreading Christianity throughout the Middle East and Europe.

Within a year of Kalinga’s defeat , Emperor Ashoka converted to Buddhism and transformed from tyrant to philosopher-king. He changed what it meant to be king from divine representation to servant of the sangha, the Buddhist community. He envisioned and implemented a culture of peace that cares for all living beings. Along the way, his well-funded proselytizing took Buddhism from Italy to his west to Vietnam to his east.

What generated such a incredible turnaround!? Competing explanations abound, as one might imagine. One legendary answer, frequently quoted, provides this confession: What have I done? If this is a victory, what’s a defeat then? Is this a victory or a defeat? Is this justice or injustice? Is it gallantry or a rout? Is it valor to kill innocent children and women? Do I do it to widen the empire and for prosperity or to destroy the other’s kingdom and splendor? One has lost her husband, someone else a father, someone a child, someone an unborn infant.... What’s this debris of the corpses? Are these marks of victory or defeat? Are these vultures, crows, eagles the messengers of death or evil?

Whatever the details, Ashoka’s violent ambition morphed into a benevolent support for citizens of the empire and those beyond. For next 30 years, he turned into the good ruler people have dreamed about for centuries, or so the legend went. Of course, for nearly 2000 years most of what was known about Ashoka came from Buddhist texts written four to six hundred years after his death. The Vedic community, which he had abandoned, paid him no attention until 1915, when a linguistic puzzle was finally solved and Ashoka’s historic legacy finally swung into view.

The story goes back to 1828 when a brilliant Anglo-Indian archeologist and philologist, James Prinsep, managed to translate the ancient Brahmi language. Brahmi was the preferred language for the 33 “Edicts of Ashoka,” inscriptions we have today, carved in stone on huge, 50-ton “Ashoka Pillars “ as well as massive boulders and cave walls. Some of the inscriptions are brief, others run to hundreds of words. They were carved repeatedly in sites across the empire. The collection of 14 “Girnar” edicts, for instance, has been found at five sites and a shortened version in two others.

In these ‘letters’ to his people are more intimate than official. Ashoka refers to himself “Beloved by the Gods, King Piyadasi,” which means, “he who regards everyone with affection.” Not until 1915, when the last of the Edicts was discovered, do we find reference not just to King Piyadasi, but to Ashoka, confirming his connection to them all. What had been consigned to legend gained historic currency. Who emerged was a leader who championed equality, social just, religious tolerance and more. H.G. Wells wrote, "Amidst the tens of thousands of names of monarchs that crowd the columns of history, their majesties and graciousnesses and serenities and royal highnesses and the like, the name of Asoka shines, and shines, almost alone, a star."

The discovery woke India up to its hidden historical treasure. By the mid-twentieth century Ashoka’s reputation throughout south Asia returned to what it was over 2200 years ago. At the center of India’s flag is the Ashoka Chakra (see left), an image found on a number of the Edicts, representing virtue. Though he became a Buddhist, Ashoka’s achievements as a ruler are a matter of national pride today.

The Edicts themselves offer a personal glimpse into Ashoka’s world and what he hoped to engender. They tend towards the practical. In the first of the Girnar inscriptions, we read, “Formerly, in the kitchen of Beloved-of-the-Gods, King Piyadasi, hundreds of thousands of animals were killed every day to make curry. But now with the writing of this Dhamma edict, only three creatures, two peacocks and a deer are killed, and the deer not always. And in time, not even these three creatures will be killed.”  Promoting vegetarianism, but gradually.

What makes Ashoka singularly fascinating among great reformers in history is that he actually had the power to give expression to his vision. A practical administrator, he built accountability systems into his reforms. From the Edicts we can discern that…

Ashoka’s religious conversion changed his life and India’s. His Edicts, while steering away from rituals, dogma, and festivals, promoted Buddhist values in everyday living. His broad agenda expressed his understanding of Buddhist “dhamma” (from Pali) or “dharma” (from Sanskrit), a word rich in meanings about the disciplines which make life fulfilling and meaningful. Dhamma, in essence, calls for kindness to all life, truth telling, respect, and generosity. To promote the Dhamma, Ashoka built thousands of stupas (Buddhist worship sites) throughout the empire. He sent Buddhist teachers and priests to Syria, Iran, Egypt, Greece, and Italy; to Nepal, Tibet, and China; to Miramar, Thailand, Laos, Cambodia, and Vietnam, and he sent his daughter, Sanghamitta, and his son on Mahinda, both ordained monastics, to Ceylon (now Sri Lanka). The young king, and the nation followed. Essentially, Ashoka’s missionary efforts transformed a young Buddhist reform tradition into a world religion.

Buddhist proselytizing sounds oxymoronic today, to be sure, but Ashoka’s doesn’t fit your stereotype of a missionary. He was not a philosopher or priest, instead working to improve peoples day-to-day living, albeit, with Buddhist values. Simultaneously, he had an interfaith agenda he pursued as seriously as Buddhism. He called for mutual respect among us all, regardless of religion. He encouraged non-Buddhist educators and asked all schools to teach about and appreciate all religions. Hindus, Jains, and Pagans were as fully welcome in this empire as Buddhists. He observed that harming someone else’s religion harms your own.

Ashoka’s new kind of civilization faded away, becoming legendary within 50 years of his death. Gradually Hinduism in India absorbed Buddhism back into the mother faith, and Buddhism was left to thrive beyond India’s borders in lands where Ashoka had sent missionaries.

Then 22 years after the 1893 World’s Parliament of Religions, history’s veil rolled back more than two millennia to reveal a global leader who achieved a peaceful, constructive, interfaith culture that lasted the better part of a century. His achievement is a prod for those who share similar dreams about the future. We should all be studying the Edicts of Ashoka.

----------
Quotations from Ashoka’s Edicts were translated by the Ven. S. Dhammika in his The Edicts of King Asoka: An English Rendering (1993), which is freely distributed online by Dharmanet International. Bhikkhu Dhammika is spiritual director of the Buddha Dhamma Mandala Society in Singapore.