Timphu, Bhutan -- “A young man from a countryside was carrying a cart-load of coconut to the market.” Thus began Ajahn Jayasaro, a Buddhist monk born in England narrating the story within which was embedded a Buddhist moral to some 30 or so mid-aged civil servants. 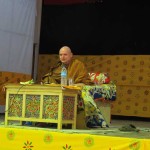 Ajahn Jayasaro’s interest in Bhuddism grew during his yearlong stay in India when he was 17 years and subsequently left for Thailand a few years later to study Buddhism under the guidance of one of Thailand’s most renowned meditation masters, Ajahn Chah.

The man, he continued with the story, asked a young boy about the fastest and the most convenient road to the market.

The boy, Ajahn Jayasaro said, replied that if he went slowly the man would reach the market within half an hour and if he hurried, it would take him an hour.

“‘Nonsense’, the man said and set off with his cart down the road,” his voice echoed inside the hall as the young office-goers listened with rapt attention to the story at the YDF hall that has the capacity to accommodate more than 800 people.

“The number of potholes on the road overturned his cart and he had to collect all the coconuts and put them on his wagon,” he said. “To reach to the market he took an hour whereas the other carts, which moved slowly took only half an hour.”

Ajahn Jayasaro said that in real life this made sense as Buddhism also talked about the “middle way”.

Middle way, he said, was not always straight.

“To reach a destination, one should follow that winding road, although it may not be the most effective, fastest and convenient one,” he said.

He then delved into Buddhist tradition of believing in faith, which he said was in fact one of the key spiritual faculties.

Faith, he said, was always accompanied by wisdom.

“Buddha said that faith and wisdom should be balanced,” he said, adding that faith without wisdom became a fanatic, a superstition.

Similarly, intelligence with critical faculty, he said, without faith, easily turned into something cynical, giving ability to “see fault of everything and value of nothing.”

Faith, he said, was what simplified, clarified and focused the mind that was vital in making decision and negotiating the choices.

To achieve a goal, people he said, should be confident and believe in their inherent capacities.

“Buddha, when he attained enlightenment, was still a human being,” he said. “Actually the enlightened Buddha proved the human capacity for enlightenment too.”

Similarly while going for pilgrimage, it is not the point of reaching there, offering butter lamp and prostrating to the deities, he said, but the effort that was involved in visiting that holy place.

To conclude the session, Ajahn Jayasaro talked on “mindfulness” as an important tenet to living a happy life.

“To be looking at your watch every 15 minutes and realising how you feel, is the mindfulness practice,” he said. “It’ll help one realise the value of life.”

Going alone into the cave, closing eyes and praying for weeks, months and years, he said was not necessarily practicing the dharma.

“In fact, opening our heart, ability to listen and feeling the emotions, is part of the dharma,” he said.

He advised the audience to elevate the idea of being happy, lest people grow more materialistic and indulge more and more in worldly activities.

“That is a source of depression and frustration,” he said. “Pleasure and confidence doesn’t come by buying things but it’s the inner feeling which comes by educating ourselves.”