Colombo, Sri Lanka -- The 144th birth anniversary of Sir Baron Jayatilaka, former leader of the State Council and Minister of Home Affairs as well as the first President of the Colombo YMBA falls on February 13. 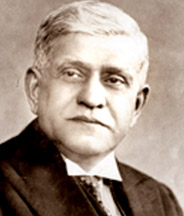 Born in 1868 in the village of Waragoda in Kelaniya, Sir Baron had his early education at Vidyalankara Pirivena in Peliyagoda where he studied at the feet of the scholar monk, the Ven. Ratmalane Sri Dharmaloka Thera, reputed for his knowledge of Pali, Sanskrit and Buddhist Philosophy. Later, his secondary education was at Wesley College, Colombo, where he had a distinguished career.

It is said that on leaving school, Sir Baron sought employment as a clerk in the Department of Lands but the interview board found him too good for the post and observing his potentialities advised him to pursue further studies.

Sir Baron graduated from the University of Calcutta in 1898 and pursued further studies at Jesus College, Oxford in UK, from where he obtained the First Degree in 1913 and the Masters Degree a few years later. Sir Baron was admitted as a Barrister-at-Law of Lincolin's Inn in 1916.

Soon after the establishment of the Colombo YMBA in January 1898, Sir Baron was invited to be its first President, a position he held without interruption until his death in 1944, a period of 46 years. Among his many contributions to develop and expand this Association to occupy an important position in the Buddhist affairs of the country, was the conduct of Dhamma examinations for students of Dhamma schools.

Sir Baron commenced his career as an educationist and was Principal of Dharmaraja College, Kandy founded by the Buddhist Theosophical Society (BTS) in 1890 and later Principal of Ananda College, Colombo, the premier Buddhist secondary educational institution in the country. He also held the post of General Manager of Buddhist Schools of the BTS.

In the temperance movement Sir Baron played an active role. In 1912 he was a member of a delegation that presented the cause of temperance to the Secretary of State for Colonies in London. During the racial riots between the Sinhalese and the Muslims in May 1915, he was arrested and imprisoned for 46 days along with other well-known Buddhist leaders. They were later released in the absence of reliable evidence to connect them with the riots. These events propelled Sir Baron and others as national leaders and earned for them the respect and sympathy of the people.

Sir Baron was the Secretary of three delegations that made representations to the Secretary of State for Colonies in London advocating constitutional reforms for the country between mid 1919 and 1921. A few years thereafter he took to active politics when he was elected uncontested to represent the Colombo District in the reformed Legislative Council of 1924.

In the new State Council of 1931 Sir Baron was returned uncontested for the Kelaniya seat and re-elected unopposed once again in the election of 1936. From 1931 to 1942, he was the leader of the State Council and Minister of Home Affairs. He resigned from Ministerial Office in 1942 to accept an appointment as ambassador for Ceylon in India to expedite the resolution of mutual problems between the two countries. Two years thereafter, Sir Baron was taken seriously ill and passed away on May 31,1942 while on the way to Colombo from New Delhi by air.

Thus, came to an end the fruitful life of a great Buddhist leader and a dedicated statesman. A man of impeccable integrity, his sincerity of purpose in his endeavours for Buddhism and the country were acknowledged by both supporters and opponents.

Sir Baron was an exemplary Buddhist. He had a profound understanding of the Dhamma and took great efforts to practice the Dhamma in his daily life.

The invaluable Buddhist virtues of loving kindness, compassion, joy in the success of others, charity, courage and perseverance were conspicuous features of his character. By meditation and reflection, he developed a mental serenity and tranquility that enabled him to remain calm and unruffled in the hustle and bustle of life and face success and failure with equanimity.