Ashoka was no Shah Rukh Khan!

New Delhi, India -- Emperor Ashoka was a stubby man, who as a prince, visited a site in Odisha with his girlfriend. Writer Charles Allen discusses little-known nuggets about the king who made Buddhism world-famous, with Anuradha Varma. 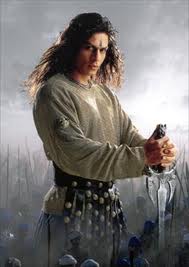 Most reviewers of Charles Allen's book Ashoka: The Search for India's Lost Emperor, which hit stores last month, agree that the Indophile author humanises the second century BC emperor in a way that history books have tried and failed. For the UK-based historian however, this was only part of the agenda. The 71-year-old, who first heard about Ashoka in the '60s and later travelled across Pakistan, Afghanistan and India, following in the emperor's footsteps, discovered the mundane (Ashoka had bad skin), the shocking (Ashoka burnt his concubines, who didn't like to caress his rough skin), and the sublime (Ashoka never referred to himself as a Buddhist, since his dharma was intended for all subjects irrespective of their faith).

Excerpts from the interview with the author:

What piqued your interest in Ashoka?

When I went to Kathmandu in 1966 as an English teacher, I was taken to the city of Patan and shown some stupas that were said to have been built by an Indian emperor named Ashoka, who had introduced Buddhism to Nepal. I had no idea who he was. Later, while travelling in Sri Lanka in 2004, I discovered that they too, regarded Ashoka as the man who brought Buddhism to their island. In India, however, while the Ashoka chakra adorns the national flag, and the lion capital is the national symbol, there's little understanding of Ashoka. My studies sought to resolve this paradox.

Why call him 'India's lost emperor'?

In The Buddha and the Sahibs (2002), I wrote about the process by which Buddhism, which flourished in India for centuries, and its Sanskrit-based culture was recovered, initially, due to the efforts of Orientalists like Sir William Jones and James Prinsep. I wanted to examine why Ashoka was written out of Indian history. In moving from a genuinely all-Indian non-specific dharma, as promoted in all his edicts, to embracing Buddhism so blatantly with a stupa and vihara-building programme, Ashoka set himself (and Buddhism) on a fatal collision course with Indian religious orthodoxy. Jawaharlal Nehru knew what he was doing when he selected two Ashoka symbols for independent India that was to be free of caste and tolerant of all religions. These are lessons that some Indians do not want to learn.

Where did your research take you?

I visited the betterknown sights associated with Ashoka, travelling through India, Pakistan and Afghanistan. I also journeyed into previously unknown corners of Odisha. The most moving site I visited was one of his Minor Rock Edict sites, situated on a ridge overlooking the Narmada river west of Hoshangabad. There, Ashoka had a second, more personal, inscription that stated that he first went there when he was a prince with his girlfriend! When I read that I saw the emperor as a man of flesh and blood.

Your book says that Ashoka was a short man with rough skin, susceptible to fainting spells, who would have his concubines burnt if they didn't like his rough skin. How did you discover these facts?

Lost sources. In the Ashokavardana, his bad skin is ascribed to his meeting the Buddha in a previous existence and making him an offering of earth. At the South Gateway in Sanchi, he is de-Ashoka is known primarily from his edicts, but we also have three important literary sources: the Mahavamsa from Sri Lanka written in Pali, the Ashokavardana from China, originally written in Sanskrit, and the accounts of the Chinese travellers Faxian and Xuanzang that draw on other picted as a short, fat man with a bloated face - not at all like Shah Rukh Khan!

What was Ashoka's contribution to Buddhism?

There is evidence that he was a nominal convert even before the battle of Kalinga, but the suffering he caused at that battle shocked him deeply. My interpretation of Ashoka's life is that after spreading his message of dharma, which was reli giously inclusive, he made the fatal mistake of publicly espousing Buddhism and then set about transforming the religious landscape of India with his stupas and viharas. There is no doubt that in throwing his weight behind Buddhism, Ashoka transformed what was until then a relatively minor cult into a state religion, and that in subsequently undertaking a missionary programme, he transformed Buddhism into a world religion. However, he exhausted the state treasury in the process, which led to opposition from the Brahmins, who had traditionally conducted all religious duties. When Ashoka grew old, there appears to have been a revolution that sought to overthrow him. Certainly, after his death, his empire broke up.