Monk to test his endurance to discover "Emptiness"

Winnipeg, Canada -- Sunim Daeung is a 42 year old Korean Monk on an epic adventure of self discovery. His goal is to circumnavigate all of North America then travel down the west coast of Mexico and continue all the way to the southern tip of South America....on a bicycle! 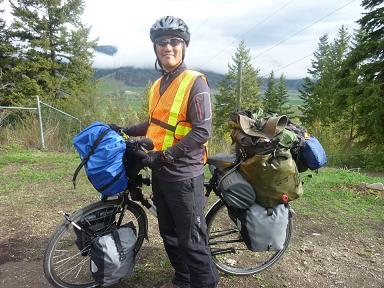 He says he will camp whenever possible and stay in hostels when he can't. The members of his temple have been saving and donating to send him on this trip for a very long time.

I asked what motivated him to embark on such a trip. He humbly replied, in just four soft spoken words, while gently placing his open palm to his chest, "To test my spirit".

The immensity of the task facing Sunim as he treks across the American continent are as follows: 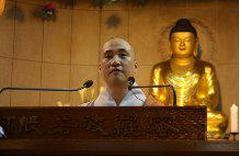 Sunim entered the monastic life at 19 years old and has spent the last 23 years of his life helping and teaching others. Sunim started his Journey Of Spirit in Vancouver and is presently heading through southern Saskatchewan and heading for Toronto, Ottawa, Montreal, Quebec City and then on to the east coast and St. Johns NB.

From there its down to New York City then west to California. Then it's south to Mexico, Guatemala, Honduras, San Salvador, Nicaragua, Costa Rica, Panama, Columbia, Ecuador, Peru, Bolivia, Chile and finally to the southern tip of Argentina.

Through this endurance, Sunim is demonstrating the very essence of "emptiness" by offering to test the limits of his body and mind. Along the way, he believes he will discover some parts of this truth or Dharma as taught by Buddha.

This article is an appeal to readers who happen to stay along Sunim's path to make offerings to this monk, by allowing him to have a warm bed and a hot meal at every stop he makes.

In the east, making offerings to monks, where it is known as "dana" is a virtuous and meritorious deed. What more if the offering ends with some words of wisdom from the monk, and the synergy of this symbiotic relationship is thus complete.

Sunim is a kind and gracious monk, who will positively influence the lives of those he encounters, even if just for a day.

WHAT YOU CAN DO TO HELP SUNIM