Buddhist Activism and Public Policy: The International Network of Engaged

San Francisco, CA (USA) -- Jonathan Watts is a member of the executive board of the International Network of Engaged Buddhists (INEB). He is also the coordinator of Think Sangha, a Buddhist think tank affiliated with INEB. In addition, he is a fellow at the Jodo Shu Research Institute in Tokyo, a fellow at the International Buddhist Exchange Center in Yokohama, and the author or editor of several books on engaged Buddhism and social justice. 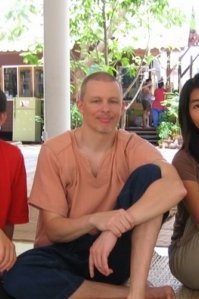 This interview took place via telephone on July 2.

Jonathan Watts: We feel like there are a lot of people who are socially engaged who, as another friend said here, "just happen to be Buddhists." They're engaged and they're Buddhists, but their Buddhism is not really informing their social action. They tend to understand social issues using other frameworks, like Marxism for example, and not bringing concepts and ways of thinking unique to Buddhism to their social activism.

A really influential book and essay has been Ajahn Buddhadasa's "Dhammic Socialism," written in the 1970s. In [that book] he talks about the difference between Marxism and the socialism of the day and what he understands as Buddhist socialism.

That kind of spirit and that kind of thinking is what's behind Think Sangha. We're looking at the importance of engaged Buddhism on a certain level -- what's special about Buddhism that we can bring to social issues? We feel like Buddhism brings a lot of different important perspectives, so that's why we try to think like Buddhists.

Diana Winston wrote a good essay on this called "A Socially Engaged Buddhist Methodology." She has these different categories: One is to find textual resources, so can we go back and find something that the Buddha said that's related to the social issue that we're working on and use it as a means for legitimizing our action or developing our thought.

Another one is socializing or applying Buddhist principles and themes. This is something that A.T. Ariyaratne, the founder of the Sarvodaya Movement in Sri Lanka, did a tremendous amount of. An example of this is re-expressing the classic teaching of the Four Noble Truths as: What's the social problem? What are the causes, especially looking at structural and cultural violence? What's the vision? How do we realize it?

And thirdly there's the aspect of radical creativity in Buddhist practice. If I'm a seriously practicing Buddhist, then much of what I do will embody Buddhist principles, so I will act out of my Buddhist creativity.

We've had -- I wouldn't call it a tension; it's sort of more of a different flavor. In our work in Think Sangha, we have people like me and Santikaro (a leading disciple of Buddhadasa) and other people who come from Theravada backgrounds who love to follow the second style, kind of Abidhamma-like -- taking principles and applying them and thinking about modern society using Buddhist conceptual models. And some of our Zen friends dislike that, feeling it is artificial. They tend toward the third style of radical creativity, trying to speak more directly, and not using overly conceptualized models. I think both styles are useful.

Right -- various schools of Buddhism think about social problems pretty differently. So, when you say that you strive to think like a Buddhist, are you calling on what you take to be a common set of resources across all of Buddhism? Or is that statement more aspirational -- that you think this is the best of what Buddhism has to offer and you're therefore claiming the label? I could also see self-identifying in this way for strategic reasons -- knowing that this will have a cachet for a certain sector of the population, that it will lend you credibility and influence.

Well, I think fundamentally we use the word "Buddhist" as an identity marker -- we're proclaiming our identity. We're first and foremost Buddhist, maybe even before we're social activists ("socially engaged" Buddhism is a modifier of "Buddhist"). So I think the common grounding is that we're Buddhists, and then we have become socially active.

Obviously, there are people who became socially active first and then became Buddhists later. I mean, there are plenty examples of that, like our colleague Alan Senauke who was a student radical at Columbia University in the '60s and then came into Buddhism later. But eventually what happens is that Buddhism becomes the core identity, because it's seen as the grounding for social work, and without that grounding, you can lose what we feel are essential aspects of social activism, like non-violence, open-mindedness and holding suffering without over-reacting.

In INEB, almost everyone agrees that if they don't have that Buddhist identity (which means that they're a Buddhist practitioner), then they won't be able to properly do their social work or accomplish what they want to accomplish, because the Buddhist practice offers them a variety of really important tools for grounding themselves and understanding how to deal with others.

We talk about three different levels of engagement. There are the tools that you use for personal practice that help keep you grounded, that can help keep you from burning out and that help to see how to deal with the world. Then there are relational tools that Buddhism has for dealing with others, dealing with enemies, dealing with difficult people. And then at the third level are the Buddhist tools for understanding the world and how to see and understand society.

-------
Source: http://www.huffingtonpost.com/matt-bieber/buddhist-activism-the-international-network-of-engaged-buddhists_b_1728546.html
Note: the full interview is available at The Wheat and Chaff (http://www.thewheatandchaff.com/ineb-watts/). Follow Matt Bieber on Twitter: www.twitter.com/PMatty_Bieber