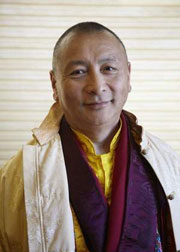 As a Buddhist teacher, Bardor Tulku Rinpoche knows about turning good intentions toward the world at large. He will be in Battle Creek to talk about compassion as the heart of spiritual practice on Sept. 21. The event is free and open to everyone.

Bardor is a “tulku” - a title given to a reincarnated lama - and a “rinpoche,” a title of respect and achievement.

When Bardor Rinpoche was a young boy, his family had to flee occupied Tibet and he was the only one to survive. His trek ended with the 16th Karmapa, who instantly recognized him as the third incarnation of a Tibetan sage.

Rinpoche studied in a monastery in the Indian state of Sikkim. In the 1970s, he was sent to the United States to teach Buddhism, where he established the Kunzang Palchen Ling center in Red Hook, N.Y.

Matt Willis of Battle Creek first crossed paths with Bardor Rinpoche back in 1990. Willis was studying the tenets of Buddhism from books, but he said the lama’s authenticity spoke to him beyond what any text could offer.

“Oh, this is my teacher,” Willis remembered feeling.

Now, Willis is part of the Palchen Study Group, six to 10 people who meet in Battle Creek to study Tibetan Buddhism and meditation. Bardor Rinpoche is their spiritual director, and his visit to Battle Creek is part of a weekend of workshops.

Bardor Rinpoche took time on Thursday to speak to the Enquirer about genuine motivations, spirituality and happiness. He was assisted by a translator, Peter O’Hearn, also known as Lama Yeshe Gyamtso.

Is there an example of a time in your life when you wanted to react negatively, but you were able to be compassionate and found that had the better result?

“Unless you are some kind of buddha, or bodhisattva, you’re not going to be free of anger. But what we can all try to do is not be reactive and not automatically respond with anger to anger, or hatred to hatred, or a verbal abuse to verbal abuse - but to consider the other person’s needs as well as our own, and respond motivated by concern not only for ourselves, but for them. So that we act appropriately, but out of kindness, not out of hatred.”

So, it’s about the action?

“It’s actually equally about the motivation and the action.”

Did religion help Rinpoche get through losing his family, losing his home?

“Dharma — or spirituality, religion — was of great help at that time. It helped me not only face the difficulties that I underwent, but also face them in a healthy and responsible way.”

What do you think “happiness” is?

“From a mundane, worldly point of view, we usually define happiness as things going well. Like, having a long life, free of illness, free of mishap, being sufficiently affluent, having everything we need and getting along with the people around us. And of course, these things are very conducive to happiness. But, from a spiritual point of view, we define happiness as being more concerned with others than we are with ourselves. That the more concerned you are with the well-being of others, somehow, the more happy you will be. And the more you are concerned only with yourself, the more suffering you will have. So, when someone is actively involved in helping others, they’re usually pretty happy.”

How is teaching Buddhism in the West different than it would be if you were still in the East?

“There is a great difference in that people born in those Asian countries which have a long history of Buddhism, are from early life are in a fairly Buddhist environment. So, it’s sort of part of their fundamental upbringing. And often part of their education, all the way through higher education. So therefore, it’s familiar to them, it’s not foreign, and they take to it quite naturally. In this country, people interested in Buddhism are coming from a place where it’s not that well known, it’s not that mainstream. So therefore, they need to step into it very, very gradually. They need to start by learning the most basic things, and then practicing very straightforward, simple form of meditation. And it has to be taken very, very step-by-step.”

What was your training like? Did you find it a struggle at all?

“It certainly required effort. Both the learning of the ritual details and practices, and also the great amount of memorization that is required in the Tibetan religious educational system. That takes work. I mean, you have to put the work in. But, I didn’t find any of it impossible or beyond my reach.”