Ibiza, Spain -- A Spanish toddler identified as the reincarnation of a revered Buddhist lama spent his entire childhood in an Indian monastery. But at the age of 18 he returned to his family in Spain. Still hailed as a teacher, he is more comfortable on the beaches of Ibiza. 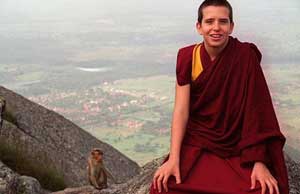 << Osel finally decided to leave the monastery when he was 18

When he was two, Osel Hita Torres was enthroned as a reincarnated Tibetan Buddhist lama.

He was dressed in robes and a yellow hat. Grown men prostrated themselves in front of him and asked for his blessing.

No-one was allowed to show him affection unless he initiated it. He had his own special cutlery.

“It must have been tempting to take advantage of that sometimes and act badly,” I say to him now.

“Yes,” he replies. “I was a tyrant and an obnoxious spoiled brat. I was pretty bossy, let’s say.”

Even by Tibetan Buddhist standards, two was a young age for enthronement, and Osel was not even Tibetan - he is Spanish.

We are speaking in Ibiza, in the courtyard to his mother’s villa. Osel is 27 and no longer a lama.

He has swapped the rigours of monastic life for playing the drums on the beach, and chilling to trance music. He is not sure he is still a Buddhist.

He was born in Granada, the fifth child of Maria Torres.

Maria had converted to Buddhism and was a follower of Thubten Yeshe, a charismatic and extrovert Tibetan lama who was travelling the West in the 1970s. 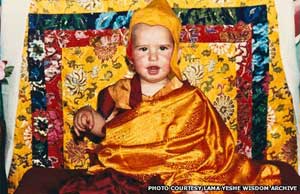 << Lama Osel when he was enthroned at 2 years old

But Lama Yeshe had heart problems, and he died in 1984 in a Los Angeles hospital, aged 49.

His followers were distraught. A few months later, Maria became pregnant with Osel.

In Tibetan Buddhism, lamas who achieved a high level of enlightenment are able to choose what happens after their death - whether to be reincarnated and, if so, where.

The conviction grew among Lama Yeshe’s followers and former colleagues that Yeshe had chosen to be reincarnated in Spain, in little Osel.

They detected in Osel a certain meditative self-containment. The way he acted reminded them of Yeshe. A baby like Osel appeared in another lama’s dreams.

Osel was taken to India for testing, where he picked out Lama Yeshe’s former possessions, including his sunglasses. The Dalai Lama confirmed that Osel was Lama Yeshe’s reincarnation.

Osel went to live in a monastery in southern India and had little contact with his parents.

“For them it wasn’t something negative, it was a huge opportunity they were giving the kid, like he’s going to Yale or Oxford.”

I met Maria at a Buddhist temple on Ibiza. I put it to her that her name is appropriate for the mother of a God. She does not reject the idea. “At the beginning, yes, it was something like this.”

The fact that Lama Yeshe had come back in her son was good news.

“It made me feel very special, the fact that he had chosen me as his mother. I wanted to share my son with the rest of the world, because it’s not my son.”

But did she not miss him? She says she was not clingy.

But having a lama in the family was disruptive for her other five children as they all travelled the world, trying to stay reasonably close to Osel when he was very small.

“When you were treated in this very deferential way, how much did you think to yourself secretly ‘This is crazy’?” I ask him.

“For me it was completely normal,” he says. 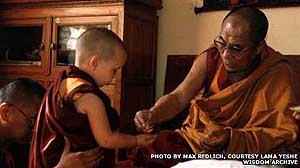 << Lama Osel with the Dalai Lama

When he was nine, he sent a cassette tape to his mother where he pleaded to be allowed to come back to Spain.

Instead his father, Paco, went to live in the monastery with him, and his younger brother, Kunkyen, went to join him as a monk.

The turning point came when he read Herman Hesse’s Siddhartha, and he started to wonder whether he was a true Buddhist.

On his 18th birthday, he had a momentous conversation with his mother, which she described to me. “He said to me, ‘If I decide not to go back to the monastery, can someone force me to go back?’”

But the monastery wanted him to return.

“I got a huge amount of letters and phone calls, and people coming to visit me, just telling me that I made a big mistake, that I lost a huge opportunity, that was my destiny, my purpose, blah-blah-blah, whatever.”

Maria was also put under pressure but she supported his decision, and still does.

Life outside the monastery was difficult for him to start with - discos and girls were baffling and scary. One of his Buddhist sponsors living in Canada arranged for him to go to school there. He then went to Madrid where he did a degree in film studies. He would like to become a documentary maker.

Sometimes Osel seems like a living disproof of the old Jesuit saying, “Give me a child until he is seven and I will give you the man.” The Tibetans had him from two till 18, but the pull of the West was stronger.