Battle Creek, Michigan (USA) -- Bob Brown is convinced, all these years later, that he needed to be lost before he could ultimately be found. 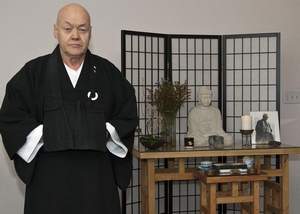 << Standing in front of an altar is Buddhist Leader Sokuzan Bob Brown in the meditation room of Sokukoji Buddhist Community in Battle Creek.

And today, at age 71, Sokuzan Bob Brown, one-time Battle Creek Central grad and a former Marine who spent his nights in the service reading about Buddhism and its teachings that spoke so directly to him, is where he always wanted to be.

“I have no more questions,” he said simply. “But the answers aren’t what I thought they would be.”

And that’s OK, too, because as the spiritual head of Battle Creek’s SokukoJi (meaning “Temple of Immediate Light”) Buddhist Temple, it is always a new day and, therefore, always a chance to learn something wonderful.

It has been a steady journey of discovery for Brown, who can be found at the temple on 33 Anderson Court, not too far from the high school he graduated from so long ago.

But back then, he had no clue about where he had been or where he was a going.

“I had confusion, suffering and difficulty in my life,” he said.

Hoping to find a direction, he enlisted in the Marines and while there, he found himself drawn to the simple message of Buddhism through the book, “Zen Flesh, Zen Bones” by Paul Reps, a book first published in 1957.

Intrigued, but still confused about what Buddhism really was, when Brown left the Marines he went to study in 1973 with Chogyam Trungpa Rinpoche (the last name meaning “Precious One”), a Tibetan meditation master.

Two years later, he established the Dharma Study Group in Battle Creek and it eventually became the Sokukoji Temple, a three-story brick building tucked inconspicuously in a lot and which used to be a VFW hall.

This is where Battle Creek’s small, but dedicated, group of Buddhists come to visit, to listen to Brown and to meditate. And Brown has become one of the region’s authorities on Buddhism, speaking frequently at local colleges about this journey he has spent a lifetime on.

He is careful to say that Buddhism isn’t as much a religion as it is a “spiritual path.”

“It doesn’t posit or deny a creator,” he said. “In fact, when Buddha was asked ‘Who created all this?’ he was silent on it. People come and meditate who are Christians. We respect other peoples’ religious path. Buddhism is not at war with anything.”

Buddhism has its origins about 2,500 years ago when Siddhartha Gotama, known as Buddha (from the word budhi, which means “to awaken”) had his enlightenment at age 35. He then spread his philosophy of heightened awareness for the next 40 years and now Buddhism is practiced by some 300 million people around the world.

In Battle Creek, Brown estimates there are 50 to 100 practicing Buddhists and most find their way to the temple at one time or another to meditate or to take in one of Brown’s classes.

On this day, there were two people meditating in the prayer room, both kneeling, staring at the wall and practicing what in Japanese is known as “shikantaza” or “just sitting.” Brown said, with occasional, breaks, they will meditate for eight hours a day.

Brown also said that anyone interested in meditation, the main tool of Buddhism, are welcome to attend, even if they aren’t Buddhists.

A major part of Brown’s duties is his work in local prisons in his role on the Chaplaincy Advisory Council of the Michigan Department of Corrections. He will go to prisons around the state and offer Buddhism as a chance for them to find the answers they need. He said prisoners can change their religion choice every six months and, often, many look at Buddhism for its simplicity and message.

“It’s awareness rather than trying to fix someone,” he said. “In Buddhism, no one is broken.”

Brown has run the current temple for more than 30 years and, as a 501(c)3 nonprofit, operates exclusively off donations. And while the temple pays no taxes, the mundane, and sometimes expensive, issues of daily life also creep in.

For example, the Sokuzan interrupts an interview to check on the arrival not of someone seeking spiritual advice, but someone to provide an estimate for replacing the temple roof.

Brown, who admits the practice if Buddhism is not for everyone, has been aided by his wife, Priscilla, also a practicing Buddhist who is a social worker full time in Detroit. They have five children, four boys and daughter, and two of whom are practicing Buddhists.

And even after spending so many years in Buddhism, Brown admits he still has much to learn and much to teach. Indeed, it was in 1990 when he met his Zen Buddhist teacher, Kobun Chino Roshi, and became his student and it wasn’t until 2007 when he was ordained as a priest by the Rev. Shoho Michael Newhall. Now he is a Buddhist monk.

He has traveled the world and met the Dalai Lama (“Before he was famous,” he joked) and is planning a retreat to Japan with some of his students in December.

“I’m content in my life but extremely motivated to help people,” he said.

He is perplexed, but not surprised, at how so many religions pit people against each other.

“People are confused,” he said. “They want to be happy but instead of acknowledging that confusion they blame others. Everything is basically good, just confusion. And confusion looks like evil.”

He shakes his head.

“Buddism is not at war with anything,” he said.