Renowned Indologist A.K. Warder treated Pali as an independent language, rather than just a derivative of Sanskrit 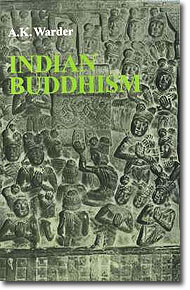 << The late A. K. Warder's most famous work, "Indian Buddhism"

He studied Sanskrit and Pali at the University of London (SOAS). His doctoral thesis, later published under the title Pali Metre: A Contribution to the History of Indian Literature (Pali Text Society, 1967), was supervised by the late John Brough.

Professor Warder was active for some years in the affairs of the Pali Text Society, which also published his first bookIntroduction to Pali (1963; 3rd revised edition, 2005). In this text book Professor Warder took the then revolutionary approach of treating Pali as an independent language, not just a derivative of Sanskrit.

Professor Warder's first academic appointment was at the University of Edinburgh in 1955, but like so many other talented British academics of the 1950s and 60s he sought greener pastures in what many older Brits of the time probably would have referred to as ‘the colonies’. He came to the University of Toronto in 1963, where he was to remain until his retirement in 1990.

As Chairman of the Department of East Asian Studies during a formative and prosperous period, he built up a strong programme in Sanskrit and South Asian Studies, which for some years existed as a separate Department of Sanskrit and Indian Studies. During that period he hired then young and upcoming talents such as Jeffrey Masson and Bimal Krishna Matilal, who later held the Spalding Chair at Oxford.

Professor Warder was a very learned scholar and an indefatigable worker, as witnessed by his impressive output of books. His extensive contribution to Indological scholarship included his monumental 8-volume study of Indian Kāvya Literature (Motilal Banarsidass, 972-2011), his well known Indian Buddhism (1st pub. 1970; 3rd revised edition, Delhi: Motilal Banarsidass, 2000), as well as his other books on Buddhism, Indian philosophy and Indian literature, not to mention his first two books Pali Metre: A Contribution to the History of Indian Literature (Pali Text Society, 1967) and  Introduction to Pali (Pali Text Society, 1963; 3rd revised edition, 2005).

A volume of studies in his honour was edited by Profs. N.K.Wagle and F.Watanabe (1993).

His private persona is somewhat shrouded in mystery. He seemed to have been reluctant to talk about himself, a very British reticence to let others into his private life. According to those who knew him better he eagerly talked about scholarly matters, about music, the performing arts, poetry, and expressed his strong and even controversial opinions about scholarly, educational and cultural subjects. I therefore take the liberty of quoting three other scholars who knew him so much better than I.

The first one is from Professor Leonard Priestley (retired) of East Asian Studies, one of Professor Warder’s first students in Toronto:

“When I said we knew the Warders ‘fairly well’, what I meant was that we had dinner with them a few times. They never said anything much, as far as I can recall, about themselves, nothing about family, how they met, anything like that. He was perhaps traditionally British in that reticence, and I think in any case had a naturally strong sense of privacy.

As for his character, my impression was that he was a kind, gentle person with a good sense of humour, but with a certain tendency to stubbornness. He enjoyed life, but his dominant passion was of course his work. He clearly had a strong sense of the injustice (and stupidity) of what he saw as common Western views of Indian culture, and insisted on the intrinsic value of the Indian tradition and the need to understand it in its own, Indian terms.

From Richard Hayes, Professor of Buddhist Studies at the University of New Mexico:

“I took several courses with Professor Warder as a graduate student. He struck me as a true humanist. That is, he had a deep appreciation and vast knowledge of the humanities. He loved the performing arts, poetry, history, philosophy and scholarly writings of all kinds. His academic specialty was the culture of India, broadly construed. He was of a generation less specialized in one particular aspect of India than most scholars of subsequent generations.

He instilled in his students a conviction that Indian culture was worth studying for its own sake and should be assessed by its own standards rather than by European colonial standards. His attitude has become the norm nowadays, but in his generation it was less common. He expressed his concern that the humanities in North America were in a state of decline through a kind of vulgarization, and he saw himself as trying, somewhat quixotically, to counter that trend.

I am sure other people may have seen Professor Warder in other ways, but those are my impressions of the man.”

“Professor Warder had a very easy manner about him,  [he was] very unpretentious, very willing to talk about anything to do with scholarship, and at the same time he seemed to have broader interests.  So I was attracted to this.  His book on learning Pali is excellent, and I used it to learn Pali, and it served me well.  He was a man seemingly without prejudices.”

Professor Warder and his wife Nargez died of natural causes almost simultaneously. They had no children. They are being buried together after a Buddhist ceremony, united in death as they were in life.