London, UK -- Edith Hope grew up in rural Scotland as part of a large and loving family brought up in the Church of Scotland, attending Sunday school. But in her 30s a chance visit to a Buddhist monastery in Dumfries and Galloway would change her life forever. 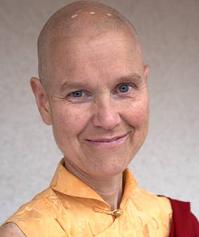 University had given Miss Hope a chance to live away from her family, gain some independence and broaden her outlook. In the mid 1980s she was working as a computer programmer for a car sales company in Glasgow.

But after her introduction to Buddhism and meditation, she chose to spend four years living on a Buddhist retreat held on Holy Isle in isolation from the outside world. The retreat was organised by Samye Ling, a Tibetan Buddhist monastery where she has lived ever since being ordained as a Buddhist nun.

What led you to Samye Ling?

I came to Samye Ling through having a friend who was interested in Samye Ling. I used to come here and eventually I got quite involved.

I saw it as the way my life was going. I saw it as a breath of fresh air. Like coming home.

Eventually I gave up my job and came to Samye Ling and did a four year retreat and became a nun. The retreat (on Holy Isle) finished in 1993, after that I came to Samye Ling to live and work. My job has evolved a little bit but after a few years I became the Abbott's secretary.

Can you tell me more about the retreat?

You live in the retreat, you don't communicate with anyone in Samye Ling, you are completely cut off from the outside world.

The retreat isn't just for monks and nuns, it's for people who are interested in doing intensive meditation. Learning the methods took four years. I was with a group of 18 women and then there was a group of men in the men's retreat nearby, doing their thing, exactly the same actually for the four years.
During this time, were you in contact with the outside world?

Did you have a religious upbringing?

I was brought up in the north west of Scotland, Church of Scotland. I went to Sunday school every week, went to church every week. I had that quite strong, you could say, moral background.

So I feel like when I became a nun, what I did was put on the outside what was already on the inside. And it doesn't feel like there is a contradiction in essence with the Christian teaching I had as a child.

How did your family feel about you becoming a Buddhist nun?

Its hard for me to say. But they are not Buddhists themselves, so it must have been a little bit strange. I think it was a surprise and it may be there are some difficulties in accepting it.

I come from a small place in Northern Scotland and now I've got a bald head and wear red robes. It's not normal! But one thing that's happened over the years, is the attitude has mellowed a little.

I have some brothers and sisters and of course they are married and have children and jobs. And so they go through all the troubles you go through in that kind of life and I don't.

So if my parents want to talk about their things they can talk to me. If they want someone to come and stay who doesn't have any demands at all, then I can come.

It's changed a lot.

Do you ever think about the other paths you could have taken and where they could have led you?

I do occasionally think about it. There is one emotion that floods my mind. And that is relief or gratitude.

I feel so happy I have somehow stumbled across this way of life most people wouldn't even know about and it suits me perfectly.

And if I'd not known about it, and followed other, apparently more conventional routes, I don't think I could have ever been happy. This is so satisfying.

Do you keep up with what's going on in the world?

If there is a disaster, we always hear about it immediately, because people ask us to pray. We hear about major things.

Sometimes I'll drive the Abbot somewhere and we'll put the car radio on as the Abbot likes to keep up with current affairs. And to know what's going wrong, and even sometimes what's going right in the world (laughs).

For me in a way it's best not to waste too much time on the news so I can focus on helping in the way that I'm able to help. Because the problem with overload of information is that you get bogged down in it. It can be really quite depressing and overwhelming. You think, what's the point in doing anything, because there is so much wrong, what can I do? So I feel like to overcome that, partly at least, I know there is something I can do to help the world and I'm going to do it.

And if the information helps that, then I want that information. And if it doesn't then I'm happy to leave it alone.

What would happen if you fell in love?

I have thought about it, and thought it's a bit like, if you were in the most happy relationship then why would you look somewhere else? And even if you did come across someone you found very attractive, you wouldn't want to give up that wonderful relationship that was already giving you everything you needed.

It would not be much of a temptation.