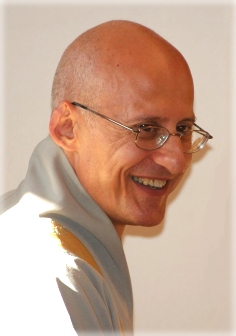 Ven. Wu Bong, a Soen Sa Nim (Zen master) was Head Teacher of the Kwan Um School of Zen Europe and was a student of the late Zen Master Seung Sahn, from who he received inka and dharma transmission in 1993.

He was Seung Sahn Sunim’s first American student, having previously practiced with Shunryu Suzuki at the San Francisco Zen Center and also with Tarthang Tulku.

He helped Zen Master Seung Sahn in establishing the Kwan Um School of Zen in Poland in 1978. Soen Sa Nim graduated from Brown University where his concentration was mathematics and holds a fourth degree black belt in Shim Gum Do, a Korean art of swordsmanship.

In 1993, Soen Sa Nim received the transmission of Dharma and became the seventy-ninth Patriarch in his lineage.

Since 2010 Ven. Wu Bong divided his time between monastic practice in Korea and his duties as Head Teacher of Kwan Um’s European branch.

He began teaching in Europe in 1984, the year he received inka. Zen Master Wu Bong was a fourth degree black belt in Shim Gum Do (Korean swordsmanship) and was a graduate of Brown University in Providence, Rhode Island.