Meet the only Buddhist monk in the village

St. Athan, Wales (UK) -- It’s not the first place you’d expect to find a Buddhist temple. But if you’re looking for a connection with spiritual well-being and enlightened energy, just ask for the old post office. 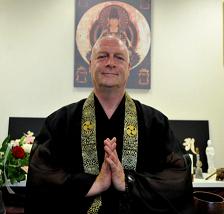 << Tenjo – also known as Bill Wright – is the only Buddhist monk in the village (Picture: BPM Media)

The building in the south Wales village of St Athan has been transformed into a holy place which is attracting people from far and wide.

It offers an ancient form of healing called kaji and such has been the demand that head priest Tenjo – also known as Bill Wright – has had to knock down an interior wall to make it bigger.

The 55-year-old mental health worker said: ‘I became involved in Buddhism 15 years ago when I met an old girlfriend who was completely bald.

‘I thought she was ill, but she told me she had joined a Shingon Buddhist temple in Bath.

‘I went along and ended up on a mountain in Japan where I was ordained. I was given the mission to set up a new temple in Britain.’

He plans to take the temple’s work into schools to encourage young people to practise meditation.

‘Because of the life pressures they are under, we think Buddhist techniques can help them,’ Tenjo added.