DR of Congo -- Bhikkhu Bodhiraja, who is a Congo citizen, was ordained as a monk only five years ago. Yet he has been a huge service to the order of Buddhism in Congo. 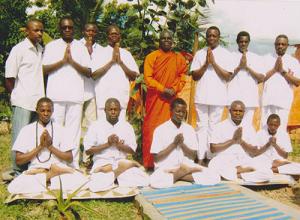 He was able to build four Buddhist temples in main cities of Kongo due to his dedicated work. Bhikkhu Bodhiraja is acting with the guidance of Ilukpitiye Pannashekara thero who is currently residing in Tanzania.

Bhikkhu Bodhiraja could gain considerable amount of attention of the Congo people and many who seek spiritual development have become devoted Buddhists. A Bodhi tree also has been planted in Congo , which is a branch of the bodhi tree in Tanzania planted in 1920.

Bhikkhu Bodhiraja is due to attend to a Buddhist summit in Sri lanka in September 2013.