Mumbai, India -- Spiritualist and pioneer of the Vipassana meditation in India, SN Goenka, 90, died late Sunday night at his residence in Mumbai due to old age, an aide said here on Monday. 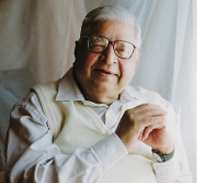 He is survived by his wife Mata Elaichidevi and six sons.

The funeral would be held on Tuesday in Jogeshwari electric crematorium, said aide Gautam Gaikwad.

Goenka started teaching Vipassana meditation in 1969 and followed it up with a meditation centre in Igatpuri, near Nashik, in 1976.

Born and raised in Burma, Goenka was a successful businessman when he came in contact with the late Sayagyi U Ba Khin, who taught him the Vipassana techniques.

After 14 years training under Sayagyi, Goenka decided to settle in India and started teaching Vipassana meditation in 1969.

He established the Vipassana International Academy, a meditation centre in Igatpuri in 1976.

Later, 172 more such centres blossomed worldwide, including 75 in India.

In 1982, he became a vipassanacharya and started training teachers worldwide and established the Vipassana Research Institute in Igatpuri in 1985.

Goenka's technique represented a tradition that can be traced back to Lord Gautam Buddha who taught 'Dhamma' as the non-sectarian way to liberation.

Goenka's approach was also totally non-sectarian and found universal appeal, including among jail inmates in India and US.

In 2000, Goenka addressed the Millennium World Peace Summit at the UN headquarters in New York.

Following his passion, he laid the foundation of the Global Vipassana Pagoda at Gorai Beach, in north-west Mumbai.

Standing at 325 feet (or the height of a 30-storeyed building), it encompasses the world's largest pillar-less stone dome, twice as big as the Basilica of St Peter at the Vatican City.

In the centre is a circular meditation hall, 280 feet in diameter with a seating capacity of 8,000, and relics of Buddha are kept in the pagoda.

Goenka believed that the monument would bridge different communities, sects, races and countries to make the world a more harmonious and peaceful place.