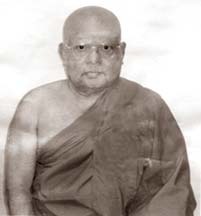 The cultured Venerable Kakkapalliye Anuruddha Nayaka Thera reminded many of the celebrated members of the Bhanaka tradition who were responsible for the oral transmission of the Word of the Buddha until it was committed to writing.

Ven. Kakkapalliye Anuruddha Nayaka Thera was born on the 20th of January, 1929, in the remote village of Kakkapalliya, near Chilaw in the North-Western Province. He began his primary education at the Hiripitiya Vidyalaya.

From childhood, he had shown great inclination towards the Dhamma and it was this affinity that made him become a novice monk when he was just seventeen years old.

He received his ordination at the well-known Sri Nivesaramaya in Ponnankanniya under the tutelage of Ven. Kakkapalliye Sri Devananda Thera, the Chief Incumbent of the temple, Ven. Mudukatuwe Gnanarama Nayaka Thera (who later served on the academic staff of the Vidyalankara University) and Ven. Mudukatuwe Seelananda Maha Thera.

The Most Venerable Kiriwaththuduwe Pannasara Nayaka Thera, the Chief Incumbent of the internationally known Vidyalankara Pirivena, was his Preceptor. When he reached his twentieth year, the mandatory age for Higher Ordination, he was conferred the Higher Ordination at the Uposatha Hall of the Malwatta Viharaya in 1949.

In 1953 Venerable Nayaka Thera sat for the Pracheena Intermediate Examination as a candidate from the Maliyadeva Pirivena in Kurunegala. In consideration of his superlative performance at the examination he was placed first in order of merit and was declared the best student in the whole Island.

In 1953 Venerable Nayaka Thera was appointed to the academic staff of the Vidyalankara Pirivena, and in the same year he received an appointment as a teacher in the Peliyagoda Gurukula Vidyalaya.

The heavy load of work he had to shoulder did not deter him from pursuing advanced studies in Pali and Buddhism.

In 1956 he sat for the Senior School Certificate Examination in the English medium, and subsequently passed the University Entrance Examination. He was admitted to the University of Ceylon in 1959. At the University he followed a Special Honours course in Pali with Eastern Philosophy and Psychology as his subsidiary subjects.

He was awarded the Honours Degree in 1963, and in recognition of his brilliant academic performance, he was appointed as a probationary Assistant Lecturer at the same university. However, in 1964 he opted to move to Vidyalankara University in the capacity of a permanent lecturer in the Department of Pali.

In 1969 the Venerable Nayaka Thera proceeded to the University of Lancaster for his doctoral research, and successfully completed it in 1972, obtaining the Ph.D degree for his doctoral thesis on "Studies in Buddhist Social Thought". Upon his return to the Vidyalankara University he was promoted to Senior Lectureship in Pali.

In 1980 he also served as the Dean of the Paramadhamma Buddhist Institute and conducted a course for Buddhist monks interested in Buddhist missionary activities in foreign countries.

The Venerable Nayaka Thera reached the culmination of his academic career when he had the rare privilege of being appointed by the President of Sri Lanka as the first ever Vice Chancellor of the Buddhist and Pali University of Sri Lanka.

During his tenure as Vice Chancellor (1982-88), with the guidance of the late Venerable Professor Walpola Rahula, he was able to establish it as a centre of excellence for Buddhist Studies attracting both local and foreign students.

In his second year as its Vice Chancellor he was able to get the university admitted as a fully-fledged member of the Commonwealth Union of Universities.

The establishment of the Buddhist and Pali University of Sri Lanka, under the Vice-Chancellorship of our Venerable Nayaka Thera is certainly one of the most significant contribution to Bhikkhu education in modern time.

It was during his tenure that the Sri Lanka Journal of Buddhist Studies was founded and the library was well-equipped with important reference materials for Buddhist Studies.

In brief, Venerable Nayaka Thera laid the foundation for the University's successful continuance and further development under the leadership of his successors. After Venerable Nayaka Thera had served two terms as the Vice Chancellor of the Buddhist and Pali University of Sri Lanka he was invited by the Buddhist Institute of the Fuo Kong San Monastery in Taiwan to teach Pali and Buddhism (1989-90).

In 1992 he was invited to the University of the West in California to conduct courses on Buddhist studies. Subsequently he also had the opportunity of teaching at the Buddhist Library of Singapore, at Foo Ei Chan Buddhist College and at the Buddhist Mission in Singapore.

Venerable Nayaka Thera also taught at Chi Lin Buddhist College in Hong Kong, teaching courses on Pali and Buddhist Studies. And at the same time he served as the Visiting Professor at the Centre of Buddhist Studies of University of Hong Kong.

In spite of his devoted commitment to teaching, the Venerable Nayaka Thera has been able to participate in many international Seminars and Conferences on Buddhist Studies, and is a much sought after keynote speaker. His greatest work of research is his "Dictionary of Pali Idioms".

He was heavily involved in preparing its second volume. His effort speak volumes of his thorough familiarity with the Pali Buddhist Canon and Theravada  Buddhist exegetical literature. His other works include "The First and Second Buddhist Councils, Five Versions, English Translations from Pali and Chinese", which he prepared in collaboration with Mary M. Y. Fung and S. K. Siu.

As an excellent communicator of the Dhamma, Venerable Kakkapalliye Anuruddha Nayaka Thera's profound knowledge and eloquence, coupled with his simple but very effective style of communication endeared him to many.

He was perhaps the most popular teacher of Buddhism and Pali language among foreign students. Not only was he a good teacher but he was also a listener. His unhurried ways and simple style of living is worthy of emulation by anyone aspiring to be a good teacher.

Indeed, Venerable Kakkapalliye Anuruddha Nayaka Thera was the epitome of Buddhist recluseship, a treasure house of Dhamma knowledge, a role model for all bhikkhus, and an invaluable jewel in the Sangha Sasana.

May he attain the bliss of Nibbana.