57th anniversary of historic step to revive Buddhism in India

October 14, 1956 is the 57th anniversary of a historic event that took place in India when Dr. Babasaheb Ambedkar converted to Buddhism

Colombo, Sri Lanka -- Dr. Babasaheb Ambedkar converted to Buddhism along with about 380,000 of his followers on October 14, 1956 at Deekshabhoomi which is situated in Nagpur, Maharashtra. Ven. Dr. Hammalawa Saddhatissa Maha Thera, a reputed monk from Sri Lanka, presided over this historic function. 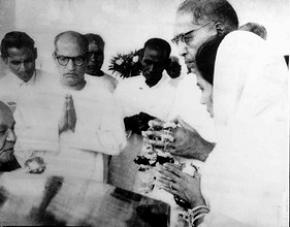 << Dr.Ambedkar embraced Buddhism on October 14, 1956 at Nagpur. Bhante Chandramani (Burmese monk) is seen administering the oath in Pali to Dr.Ambedkar & Dr.Mrs.Ambedkar. Devapriya Valisinha, General Secretary, Mahabodhi Society, is seen in the center of the picture.

Dr. Ambedkar then gave the oath of Three Jewels, five precepts, and 22 Vows to his thousands of followers.

This is evidenced by the publication of many articles written by Dr. Ambedkar in the Maha Bodhi journal during this period. When Dr Ambedkar decided to become a Buddhist and asked his followers to join him, Devapriya Valisinha attended the mass meeting held in Nagpur with several Bhikkus of the Society and helped in arranging the religious ceremony. He spoke on the occasion and presented to Dr Ambedkar an image of Lord Buddha on behalf of the Mahabodhi Society.

Dr. Ambedkar had already declared in 1935 that although he was born as a Hindu he would not die as one..After this declaration, he extensively studied the doctrines of all the major religions to choose Buddhism for him and his followers.

He selected Nagpur for his conversion ceremony, because as he explained in his speech on that occasion, Nagpur was the homeland of Naga people who had embraced Buddhism and supported its cause in innumerable ways in its early period in India. A ground near Ramdaspeth area in Nagpur was selected for the ceremony.

Bhimrao Ramji Ambedkar (14 April 1891 – 6 December 1956), popularly also known as Babasaheb, was an Indian jurist, politician, philosopher, anthropologist, historian and economist. A revivalist for Buddhism, he inspired the modern Buddhist movement in India. As independent India's first law minister, he was principal architect of the Constitution of India. President Barack Obama referred to Ambedkar as a founding father of modern India during his address speech in Indian Parliament.

He studied Buddhism all his life, and in 1950 he travelled to Sri Lanka to attend the inaugural meeting of the World Fellowship of Buddhists which was founded by Dr. G.P. Malalasekera of Sri Lanka. On this visit Dr. Ambedkar delivered a lecture at the Colombo YMBA on the topic ' The rise and fall of Buddhism in India' and during question time he was subject to a series of searching questions on Buddhism in Indian History by Asoka Weeraratna (later to play a pioneering role in sending Buddhist missions from Sri Lanka to Germany) who attended the talk. Dr. Ambedkar had been taken aback and had then thanked Asoka Weeraratna for his courage in posing such challenging questions.

Dr. Ambedkar died on December 6, 1956, just one and a half months after this ceremony. A two-mile long crowd formed the funeral procession. One of the biggest gatherings for a funeral in India up to that time.