Akong Rinpoche was key to Tibetan Buddhism flourishing in the west

by Madeleine Bunting, The Guardian, 14 October 2013

The monk Akong Rinpoche, who was murdered in China last week, fought to preserve an entire cultural tradition

London, UK -- Buddhism's popularity over the past half-century in the west has surprised and dismayed in almost equal measure. Alongside the fad for Buddhist statues in garden centres, there has been a much more serious engagement with hundreds of centres opening, many of the most dynamic founded by Tibetan Buddhists. 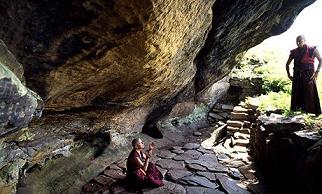 << A nun on Holy Island, a retreat centre for Scottish Tibetan Buddhists from the Samye Ling monastery. Photograph: Murdo Macleod

Given that Tibet had limited contact with modernity until the 20th century, it's been an extraordinary story of cultural export. The vivid colour and spectacle of Tibetan Buddhist monasteries, and the warmth and humour of their teachers, have contributed to making Buddhism into a rare religious success in a deepening secularism. Tibetan Buddhist teachers have familiarised thousands with meditation, increasing interest from academic researchers into the benefits of mindfulness.

Central to this history was the remarkable life of Choje Akong Rinpoche, co-founder of the first Tibetan monastery in the west, who was murdered in Chengdu in China last week. As a small child he was taken from his nomadic family to a monastery as an important reincarnation. Throughout his childhood he was honoured as a great teacher. At the age of 19, as the Chinese arrived in Tibet and destroyed thousands of monasteries, he set off on foot for India, a journey of indescribable suffering in which hundreds of fellow refugees died of starvation, exhaustion and attacks. Four years later in 1963 he arrived in England and worked as a hospital orderly in Oxford supporting a fellow Tibetan monk who was studying. Within a few years, he had gone from a life of immense monastic prestige to scrubbing toilets in a foreign country.

Anyone visiting Samye Ling, the monastery Akong Rinpoche co-founded in the Scottish Borders in 1963, or the London centre (now in a magnificent former library in Bermondsey) cannot fail to be impressed by the sheer scale of the ambition they represent. This kind of institution-building by a refugee community and the volunteer effort it has inspired are hard to match. The temples are lavishly decorated with paintings and statues according to Tibetan practice, and the rituals and ceremonies are an extraordinary spectacle of drums, bells and chanting by Tibetan monks, as well as dozens of western counterparts – an experience of Tibet in the rainy hills of the Scottish Borders.

Some found the Tibetan influence immensely appealing; others were bemused at the deeply ritualistic approach. Akong Rinpoche was a traditionalist and one of his driving motivations was the preservation of Tibetan Buddhism, in particular his Kagyu lineage (one of four lineages or sects in Tibetan Buddhism), in the face of a concerted Chinese effort to obliterate Tibetan culture. In recent years he and a team gathered thousands of single-copy manuscripts and took copies of them out of Tibet to be saved. What was at stake was an entire cultural tradition.

Ken Holmes, a Buddhist teacher and close associate for over 40 years, believes this was a task of immense value. "Tibetan Buddhism, when it is properly understood, has the most profound and complete understanding of the human mind and its possibilities. An immense treasure has been stored in Tibet all these years."

Hundreds of devoted followers would agree. On one occasion I found myself in the London centre (then next door to Lambeth Palace) for an "empowerment" ritual. The entire compound, newly refurbished by volunteers, looked resplendent and was heaving with thirty- and fortysomethings gathered to welcome Akong Rinpoche. It was the kind of reception that his neighbour, the Archbishop of Canterbury, would have relished. Other Buddhist teachers are more critical. John Peacock, once himself a Tibetan Buddhist monk, argues that western followers romanticise the Tibetan association and fail to distinguish between what is Tibetan cultural practice and Buddhism. "Tibetan Buddhism is deeply sectarian," he says.

But what Peacock and Holmes agree on is that Akong Rinpoche developed over the last decade a remarkable programme of humanitarian work in Tibet and among Tibetan refugees in Nepal and India. He set up schools, clinics and reforestation projects, as well as supporting monasteries and student monks in universities in China and India. It is a pioneering model of socially engaged Buddhism in a faith sometimes criticised for its preoccupation with spiritual development to the neglect of material wellbeing.

Akong Rinpoche supervised dozens of other projects, including the laborious process of bringing Tibetan medicine in line with UK regulations as well as developing a form of psychotherapy that drew on Tibetan Buddhist practice. What lay behind all of them was Akong Rinpoche's remarkable skills as a diplomat and a manager; he was a modest, quiet man without the obvious charisma of other, more famous Tibetan teachers. But he was brilliant at organising; he was good at making connections, whether it was with the local Scottish community – he became a good friend to Lord Steel and forged links with Scottish churches – or with the Chinese. He walked a diplomatic tightrope to safeguard his development projects in Tibet, withdrawing from any public meetings with the Dalai Lama for fear of giving offence to the Chinese.

Peacock sees his success as symptomatic of a remarkable refugee community that has managed to re-establish itself and set up flourishing monasteries in several parts of the world. He points to the history of Tibetans as one of traders and entrepreneurs between the two great civilisations of India and China. Holmes sees something else in Akong Rinpoche – an extraordinary ability to inspire others to live out the compassion on which he based all his teachings. The fundraising was never about soliciting big donations but about dozens of dogged initiatives, many of which lasted decades without losing a clear vision of the ultimate goal.