London, UK -- An Irishman, Laurence Carroll has a strong claim to be the first Westerner to become a Buddhist monk, and became famous in Burma in the early 20th Century for denouncing the spread of Christianity there. 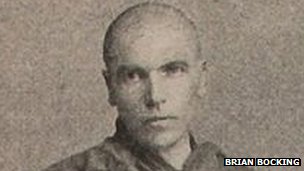 Carroll was thought to have been born in 1856 in Booterstown, Dublin. He was to later become known as Dhammaloka, meaning 'light of the Dhamma' (Buddhist teaching) or 'word of the 'Dhamma'.

He left Ireland when he was a teenager and travelled to America. After a number of years travelling from place to place, he began working on the San Francisco/Yokohama mail shipping line, but after just three journeys was thrown off the ship in Japan, reportedly due to drunkenness.

From there he made a three-week journey by steamer to Rangoon in Burma where he got work as a tally man at a logging company. It was at this stage he had his first interaction with Buddhist monks.

"The monks had a lot of respect from people and I suspect that Dhammaloka might have been a drinker and they helped him to overcome his dependency on alcohol," explains professor Brian Bocking, head of the School of Asian Studies at the University College Cork.

"It's notable that in addition to atheism, the issue of temperance became a focus of Dhammaloka's preaching as well as his coded anti-colonialism. He became a temperance campaigner for the rest of his life."

The Irishman began to train as a Buddhist monk and was fully ordained before 1900.

His ordination therefore pre-dates that of Charles Henry Allan Bennett (Ananda Metteyya) who has traditionally been dubbed the 'first western Buddhist monk', as Bennett was ordained in the Theravada tradition in 1902.

But how did Carroll reconcile his atheist principles with a spiritual life?

Professor Brian Bocking explains: "He was an atheist but the Dalai Lama is an atheist.

"What they say is that suffering is caused by the mind - what you have to do is to distil the mind and extinguish any fires of craving and you do that by following a monastic life.

"In that way Buddhism was completely compatible with Dhammaloka's atheism."

Atheism within Buddhism is a principle that still remains intact and Dr Laurence Cox, author of Buddhism and Ireland: from the Celts to counter-culture and beyond, believes that with a rise in secularism people outside of Asia became more open to Buddhist practices. Church attendances in Ireland in the 1970s were measured at 91% but in 2008 that had dropped to just 36%.

"Most Irish people who convert might have had strong associations to Catholicism or Protestantism and were faced with a lot of dogma and they don't want to do the same thing with Buddhism," argues Dr Cox.

"Buddhism allows you to redefine a bit of what matters to you. You're not looking to your own family tradition - you can step outside what can sometimes be stifling conventions and look up and have encounters with a different kind of culture that might have had an effect on you."

Kelsang Chitta is currently the only ordained Buddhist nun in Northern Ireland within the Kadampa tradition.

Having grown up with a Christian background she developed an interest in Buddhism while studying philosophy at Trinity College, Dublin. She believes that people are now attracted to elements of the religion due to its unimposing nature.

"Since the summer, we've had the biggest numbers ever coming to our classes at the [Potala Kadampa Buddhist] centre," she says.

"You can practise the teachings in your daily life, developing compassion without calling yourself a Buddhist.

"Many people would practise in that way. Take the essence of the teachings and practise and that's fine within Buddhism. It's not really necessary to label yourself."

Mixing Buddhist practices with traditional Christian faith in Ireland nowadays is not something that would have gained support with Dhammaloka who had strong views both on Christianity and colonialism.

His outspoken opinion gained him followers but also made him a figure of some notoriety in Rangoon during the first decade of the 20th Century.

And, while his anti-colonial and Christian stance may have made him popular in Buddhist communities in South East Asia it also attracted the wrath of colonial authorities.

Dhammaloka faced minor charges of sedition twice. Once in 1902 and again in 1910.

In 1910 opponents reported him to the chief court of Rangoon after he publicly accused Christians of being immoral, violent and set on the destruction of Burmese tradition.

He was bound over by the judge for a year and his supporters paid the sizeable sum of approximately 1,000 rupees as a surety he would not re-offend.

"One, he was a Westerner but a Buddhist monk and secondly, he made speeches that were controversial denouncing Christian missionaries and European colonialism."

Professor Bocking also believes the most significant aspect of Dhammaloka's conversion was that his background was no barrier to Buddhism.

"I suppose the most important thing for us in learning about Dhammaloka is that he opens up a whole world of early Western Buddhists who were not respectable types but who came out of an imperial underclass that was interested in religion."

The manner in which people in the West are encouraged to practise the religion may have changed since Dhammaloka's time but the concept that Buddhism is open to everyone from all kinds of background still resonates today.