Jen goes zen! Jennifer Aniston says she wants to be a Buddhist 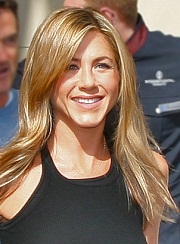 The former Friends star has been inspired to embrace spirituality by her friend Demi Moore and as well as learning more about Buddhism she is also exploring Kabbalah.

A source told the latest issue of America's OK! magazine: "As Jen gets older, she feels she's benefit from guidance. She's been talking to friends and has been interested in learning more about several religions, including Buddhism."

Jennifer - who is engaged to actor Justin Theroux - had dinner with Demi recently and took the opportunity to quiz the 'Ghost' star about her belief in Kabbalah, which is a mystical off-shoot off Judaism.

Jennifer, 45, was fascinated by what Demi, 51, said about her faith but is believed to be leaning towards Buddhism because she is such an ardent follower of yoga.

The source revealed: "Jen was struck by how calm and centred Demi seemed. Jen was intrigued and decided to get private lessons. She loves the idea of studying something spiritual, and she already does yoga, so it seems like a natural next step."