After a career of watching suffering, woman uses Buddhism and Eastern medicine to alleviate it

Maryland, USA -- Dolma Johanison runs a hand over the top of her buzzed speckled grey hair, laughs, and says it’s getting a little long. As a Buddhist nun she’s expected to keep it short. 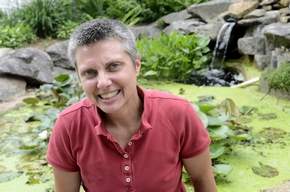 << Dolma Johanison of Poolesville is a Buddhist nun and acupuncturist. Dan Gross/The Gazette

A relic of her Tennessee upbringing, Johanison’s southern twang may have picked up a few paces between Nashville and the Pentagon, where she held her last position in the Army as a major, but it lingers in most of her vowels.

In college, Johanison started her career as a part-time police officer in Tennessee; now at 48 she’s an acupuncturist and Buddhist nun.

Johanison joined the Army National Guard after graduating from Middle Tennessee State University, ready for something beyond Tennessee. She had long eschewed the expectations of her as a young woman in the south, her younger brother Jason Tomlinson explained.

“She was always ahead of the bell curve,” he said.

Johanison described herself at the time: “I was like a shape with pointy edges.”

She worked on Black Hawk helicopters, and traveled to Central America on a peace keeping mission. She recalled one visit to a poor village, where she was accompanying a doctor. She gave away the team’s lunches to the kids—“skin across skeletons”— to the chagrin of the pilot.

As the helicopter blades warmed up for them to leave, swinging low around the cabin, a woman approached Johanison, trying to hand her baby to her. When Johanison wouldn’t take the baby, the woman slipped a folded note into Johanison’s breast pocket. In Spanish it explained that the woman wanted Johanison to take her child for it to have a chance at a better life. Over 20 years later, Johanison cried. “I was really not ok for a long time after that,” she said.

Back in the U.S., Johanison moved on to become a military police officer and then a criminal analyst. The analysis work came as a relief.

“I was never comfortable actually carrying a weapon,” Johanison said.

In 1999 Johanison was standing in her driveway in Arizona when the Army National Guard chief of staff called her from Washington, D.C., to offer her a position at the Pentagon.

“When she came up in the Army, I’m sure there were other women, but she was definitely a trailblazer,” said Tomlinson. “She really had a knack for taking challenges head on and not really paying attention to the status quo.”

She moved to northern Virginia to start the job. At the same time she started reading more about Buddhism. Johanison had tried every religion she could find, toting her two adopted children to Protestant services and traditional Native American ceremonies.

“Since I was 10 years old I had a thirst for spirituality that just could not be quenched,” she said. Then she came across Kunzang Palyul Choling Temple in Poolesville.

“The first time I walked in the door, I knew I was home is the only way I know how to explain it. I saw pictures of my teachers on the wall and I just burst into tears,” she said. She moved to Poolesville after joining the temple, where she now runs an acupuncture practice at her home. A few days a week she works out of another office in Ellicott City.

In 2008 Johanison took over 200 vows to become a Tibetan Buddhist nun. The practice centers around ending suffering and disengaging from the earthly world. Instead of charity, Buddhists focus on affecting the energy of the world.

“On the outside it may look like we sit around and we chant and we do prayers and we meditate.” But, she explained, “the process of that is a technology that changes the energy of the world, the energetic dynamic of the world and possible outcomes.”

As Johanison got deeper into her practice, her work at the Pentagon doing criminal investigation began to feel more emotionally taxing. She also sensed an impending deployment to Afghanistan, and as a Buddhist she did not want to be involved in war. So she retired and enrolled at the University of Maryland’s Tai Sophia Institute, now called the Center for Integrative Medicine, for four years of studying acupuncture.

It was the amount of suffering she had seen working as a cop and a criminal analyst that had turned her to Buddhism. In a way, the military also prepared her for Buddhism, because it taught her discipline and “how to not be an individual,” she said.

To keep to her monastic vows, Johanison has to turn down a lot of invitations. Quelling her social inclinations has been an adjustment. So has giving up a cold beer following an afternoon working in the garden.

“It gave me the opportunity to learn a lot about myself, to be OK with myself, to be my own best friend, and to take a good hard look at my faults and imperfections and how I might transform them from something negative into something positive,” she said.

Acupuncture also feeds into her practice because it’s a livelihood in which she can help others and alleviate suffering. She said it’s not all that different than being an investigator anyway, it’s still a puzzle, the pieces just look different.