Renchen-Ulm, Germany -- Mipham Chokyi Lodro, the 14th Shamarpa, died on Wednesday due to a sudden heart attack while at a Buddhist center in Germany, according to the center's website. 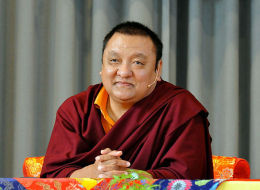 Also called Shamar Rinpoche, Lodro was teaching more than 400 students at the Bodhi Path Buddhist center in Renchen-Ulm, Germany when he experienced a heart attack on the morning of June 11.

The 14th Shamarpa was born in Derge, Tibet in 1952. When Lodro was four years old the 16th Karmapa, Rangjung Rigpei Dorje, recognized him as the 14th Shamarpa reincarnation.

Before the 16h Karmapa's death, Lodro studied with him, receiving the entire cycle of Kagyu teachings. The Kagyu tradition of Buddhism is called a "practice" tradition and is passed down from masters in every generation.