Timeless Buddhist principles should be practised

Colombo, Sri Lanka -- We finally met him, wearing a white T-shirt with a Kiwi logo. He asked “do you travel to New Zealand much?” responding i said I prefer Australia, knowing that he is from Australia, but I dislike Tony Abbot, their premier, especially given his recent call for climate change denying the alliance of greedy nations. Ven Brahmavanso responded “Well I have something in common with him, we are both abbots, but fortunately that’s where the similarity ends!” 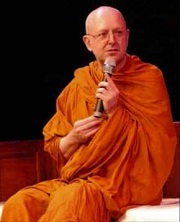 Now isn’t it awesome to meet a revered Buddhist leader with a fine sense of humour. Just the other day we heard on the news that meditation and laughter creates similar brain waves, maybe the great Brahmavanso intuitively knows this!

To be honest we were slightly nervous approaching him for in our head it was meeting a venerated priest. It’s amazing just how his presence and smile puts one at ease.

Now we start firing questions. “How do we approach Buddhism from the perspective of morality, mindfulness and scientific inquiry, so that we as young people reap direct benefit applicable in daily life?” We tell him that we ask so, because a few years ago he inspired us to a path of mindfulness and inquiry; as opposed to the typical teachings we were raised with, where faith and ritual was prime. Back then we were at best, reluctant followers.

Of the past and present, benefits for daily life

He begins “Buddhism changes and evolves with each generation. There are many good Buddhist priests in Sri Lanka I am sure, who make Buddhism relevant to people’s lives.”

Quite characteristic of him, he moves on to a story “Quite recently a Buddhist priest from Thailand moved to Indonesia, where there are millions of Buddhists even though it is predominantly an Islamic country.

He asked in a survey “What type of Buddhism would you like to be taught, and they responded, 'Just like the Buddhism taught by Ven Ajahn Brahmavanso'. ” Teach things that people can use in their daily lives, which extracting these timeless Buddhist principles that benefit ordinary lives; marriage, working, getting old, disaster, so that we can cope with wisdom and compassion, so that we can make our lives more meaningful.

You can see that even in places such as Indonesia and Korea, where great priets make use of original Buddhist teachings adopting it to modern situations, showing how it is useful in ordinary people’s lives, in governments, in business to enhance the lives of every human being.

this is occuring world over, I am sure it is happening in Sri Lanka too. Some of the old traditions will have to give way, to the older traditions.

Some people say I am a modern Buddhist priest, but I was telling Ven. Mettavihari earlier that I am one of the most traditional priets practising Buddhism and I go back to the earliest teachings of the Buddha.

Not to culture, but to the traditional (practise) of the earliest times, where Buddha told stories and similes which everybody understood. This made their lives much easier, which is why Buddhism became popular during his lifetime.”

Our next question was “What is your advice to youth on how to proactively be a catalyst to such a movement?” Yes, he says, the ones who are intelligent should become priets and nuns and end up being leadrers.

The response has us in giggles! He too giggling.” We tell him that even though we are unsure of our intellect, the thought has crossed our minds, but we were not yet convinced.

“Why not!” he asks, adding that in some instances local believed that you end up being a priest or nun after being pressurised. being a westerner Ven Brahmavanso chose to become a prieat out of his own volition “It was not because I couldn’t get a job; it was because i had a very good education at Cambridge.

Recently, in Kuala Lumpur, the only son of the second richest man in Malaysia, a multi-billionaire, is now a monk. He gave up all his wealth, billions of dollars of inheritance to live the holy life! this is inspiriation to youngsters.

Why would someone who could be a playboy, get any girl he wants, travel in his private jet, never have to do a moments work in his whole life; why would such a person give all that up to eat from food given as alms and live in a forest in a small hut?

Why did he do that? Those are the questions youth should ponder” Something that Ven Brahmavanso keeps saying is that “the bliss of meditation is much better than the bliss of sex!”He adds that Buddha was also a prince who left material comfort in search of the truth.

Buddhism calls for equity and progress

Buddha’s female relatives, later all gave everything up to become Bikkhunis. “And that’s another subject we should talk about. For now we have the opportunity for equity. Equity and equality are different. The former gives everyone the same chance, we’re not saying everyone’s equal! They should all have equal opportunity. We’re are now reviving that with opportunity for women to ordain. This will inspire young people.

Women also want to be treated fairly, so why not empower them just as young men are! That will lead Buddhism in to a new age of prosperity, with teachings which will really get to people’s hearts, which in turn would make a place like Sri Lanka a wonderful place once again! Just like during the Buddha’s time we could have Arahants priests and nuns.

The coming Esela month commemmorates Bhikkuni Sangamitta bringing the Bodhi tree to ordain in Sri Lanka. It has a great association with Bikkhunis. It’s wonderful if we can bring that back again!” Ven Brahmavanso emphasizes that priests and nuns should be given equal prominence and calls for the young to lead the way.

Stand up and be counted!

“Let the youth, with new ideas and fresh ways of looking and their energy take Buddhism back to its roots; with fewer ceremonies, many enlightened beings; fewer discourses but more understanding of the teachings of the Buddha; equity irrespective of gender cast, race or wealth, without prejudging a person. Those beautiful ideas of original Buddhism were way ahead of their time! Young people are responsible to bring this back to regenerate society and Buddhism!”

We ask him whether young people are more open minded and would relate easier with those different to them. However, society cultural norms and collectivist passions seem to hold them back. How should youth move beyond these barriers?”

Ven Brahmavanso said ”Offer yourselves to be leaders. The amazing Pakistani girl Malala, who risked being shot by the Taliban, was extremely articulate and courageous to go in front of thousands of cameras to give a speech asking for educational equity for women throughout the world, not just in Pakistan. She is a youngster of 13 or 14, and an example of what youth can achieve. Speak up! Not with anger, but with passion. Stand up for positions in government, and other positions.

Some Buddhist communities we have in Malaysia, say they get ideas and inspiration from youth and combine it with the money and resources from the older folk. When this combination is met, the resources of the elderly with the energy and enthusiasm of the young, it is indeed a successful combination!

Humour is a fantastic way to start and to end. We asked Ven Brahmavanso how to balance the path of letting go, where you want to get away from temptation and desire?” He said “you have to know the right time to let go. If you’re on the back of a motorcycle in the Colombo traffic, please don’t let go. Please be attached ”

“We asked him whether he would like to take a would you like a selfie?” He said “Seriously no”.