Seoul, South Korea -- A former journalist at the Daily Sports, Kim Byung-hoon, said how, unlike other religions, Buddhism can be scientifically understood. In his recently published book, "Hacker, Buddha," Kim said the ultimate goal of Buddhism is "enlightenment" and Buddha is the "recognized one." 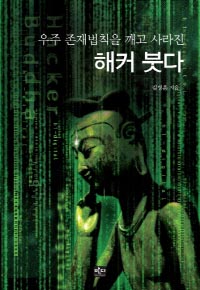 "To cut to the chase, Buddhism is a ‘pure and clear science of enlightenment,"' Kim told The Korea Times during an interview. He explained the relationship between Buddha and "samsara," the eternal cycle of birth, death and rebirth.

"Some 2,500 years ago, Buddha recognized how repetitive, and thus meaningless, life is in the course of samsara. So, he broke the cycle, like how a hacker breaks into a computer," said the 55-year-old writer.

He added, "Buddha finally reached the state of nirvana by being absent of possession and desire, and he was never reborn."

He said samsara is very scientific. "It's a simple equation. If one breaks the rule, he is out of the game. And how one breaks samsara is a main lesson and a scientific enlightenment," Kim said.

He explained, "living a benevolent and self-serving life, eventually leading to a desireless state," is how believers can become "recognized" beings as Buddha had been. "The karmas, or the consequences from one's actions in the current life, will be seen in the next one," he said.

Kim emphasized that Buddha is a human being, not a divine figure. He noted how misinterpretations of Buddha have misguided people about Buddhism's main message. Koreans mostly follow Mahayana Buddhism, which means "great vehicle," and the author questioned the role of Mahayana Buddhist monks.

"I wonder why Korean Buddhist monks are highlighted more than Buddha's original teaching," said Kim. "Historical distortions and misunderstanding of the genuine teaching have inadvertently made Buddhism more difficult, complicated and sacred." Kim observed how codes of ethics like the Eightfold Path or the Four Noble Truths are easily understood.

Kim wants to correct this misconception and inform not only believers but also others about the simple equation of Buddhism. "The term religion does not capture the entire concept of Buddhism," Kim said.

"It has universal teachings but doesn't have godly figures or works of spirits like in other religions. Buddha can't be compared to Jesus Christ, for example," he said.

Kim credited science, more specifically, the advent of quantum physics, in the 20th century, in helping Buddhism become more understandable. "People today can obtain guidance from studying the original scriptures if they approach them as if learning scientific principles," said Kim.

The author plans to study Pali, one of the languages used in the earliest Buddhist scriptures, in hopes of providing a richer and clearer explanation of Buddhism. An irreligious writer views Buddha's teachings as scientific, not religious.