London, UK -- The London Buddhist Vihara arranged a special memorial Puja to transfer merits to Dr. Ananda Guruge,a Buddhist scholar, author and former civil servant who unexpectedly passed away on the 6th of August 2014, while returning home to Los Angeles,USA, from a speech delivery tour to China and Australia. He was one of the eminent personalities produced by Sri Lanka, whose engagement in productive aspects was not confined to a singular field. 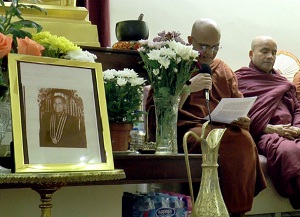 Head of the Vihara and Chief Sangha Nayaka of Great Britain Most Ven. Bogoda Seelawimala Nayaka Thera and all the resident monks , family members and close friends of Dr.Guruge from London and many well wishers participated in the evening Puja. Ven. Seelawimala Nayaka Thera in his Anusasana said that he wad deeply saddened by the untimely passing away of Dr. Guruge.

"Dr.Guruge had a long and very close association with the London Buddhist Vihara and regularly took part in many major events organised by the Vihara.He was scheduled to present the key note speech at the forth coming Anagarika Dharmapala Commemoration Ceremony to be held on the 21st of September in London.

Dr. Guruge was an exceptional speaker and erudite writer on Dhamma who did an enormous service to propagate the Buddha's teachings around the world. His demise leaves a void that will be extremely difficult to fill in the field of Buddhist studies and research." he said.

Dr. Guruge was 85 years old at the time of his death. He had represented Sri Lanka as a Diplomat in many countries and also functioned as a secretary to Prime Minister Mrs. Bandaranaike. He was well known as a leader in many Buddhist organisations around the world and compiled more than 53 books in Sinhala and English languages. A Mathaka Wastra Puja and Pan Wadeema was held to pass merits to late Dr. Guruge.