Justin Whitaker shares an interview with the creators of transbuddhists.org and a guide to trans*competence (links at the end of this article). 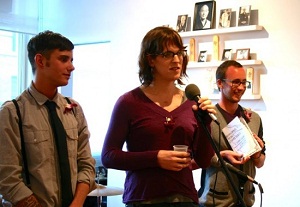 Who counts as “trans*” and why is it important for Buddhists today to understand the term?

We use trans* (“trans” or “trans-star”) as an umbrella term to describe anyone who’s had an experience of their internal understanding of their gender not matching the gender they were assigned at birth. That includes people who transition from one gender to another, people whose understanding of their own gender is something other than male or female, people who cross-dress or express their gender in different ways at different times, and more.

As Buddhists, when we practice mindfulness, we come into contact with what’s actually going on for us and others by way of our our sensations and thoughts. This coming into contact allows us to see the truth of what is happening and offer compassion where it’s needed, to ourselves and to others. This happens through connection with each other.

When cisgender people take time to learn more about trans*ness and what it can be like to live as a trans* person, they can find points of connection around shared human experience. For example, while someone who is cisgender may not identify with a particular difficult situation faced by a trans* person, it’s very possible that they can connect to emotions associated with that experience, which could be feelings of being ignored or disrespected, of those of anger, frustration, or shame.

On the other hand, when people don’t understand about trans* people’s experiences, retreat centers or sanghas or any other type of organization unintentionally replicate structures that can exclude or oppress many trans folks, such as gender segregation.

A person who learns about trans* experiences both has the opportunity to concretely support trans* people by taking steps to make Buddhist spaces more accessible, as well as to reconsider and think more carefully about their own conditioned understandings of gender.

How many trans* people are there in America? Is there a sense that there is a greater/less/about the same percentage of trans* people interested in Buddhism as in the general populous? Is there something in particular about Buddhism that attracts trans* people more than other religions?

According to demographic research, there are about 700,000 transgender people in the US, but this refers primarily to people who currently live as a gender other than the one they were assigned at birth. When you include people from the whole trans* umbrella, that number is probably considerably higher.

For some trans* people, transition can be a time in which to let go of fixed ideas of who we think we are and who we think we will become, and in which we need to develop patience with oneself and others. The Buddhist teachings can be especially helpful during this time.

Many trans* people may also come to Buddhist practice after having been forced to leave the religious community in which they were raised, so that’s another reason why it’s especially important to make Buddhist communities welcoming to trans* people.

All of that said, we don’t think there’s anything essentially more attractive about Buddhism to trans folks. Trans people are variously attracted to many different religions and spiritual practices, and Buddhism attracts some of us specifically as individuals. The key point is to make sure that others who could benefit from the healing available through Buddhist practice aren’t excluded.

What are a couple of the most common problems trans*Buddhists encounter in sangha or retreat?

As we discuss in our guide, trans*Buddhists face particular issues when attending overnight retreats. Overnight housing and restrooms are often separated between men and women, and private accommodations may be unavailable or financially inaccessible for those who do not identify as men or women, or for those who do, but whose bodies do not look like other men’s and women’s bodies.

Another issue is that people in sanghas may not have met anyone who is trans* before and say hurtful or offensive things by accident. Common examples are calling a trans* person by the wrong pronoun or asking overly personal questions of trans* people about their bodies. Using binary gendered language (“men and women”) in dharma talks or chants is another instance, and we’d recommend using “people of all genders” instead.

These issues are of particular concern in the context of a sangha, because the sangha is one of the three treasures or refuges (Buddha, Dharma, Sangha), an opportunity for practitioners to share with and learn from one another. As trans*Buddhists, we need to be able to bring our whole selves to our practice, and to be met with understanding and respect.

In addition to distributing and teaching on the guide, the three of you lead discussions and meditation sessions for groups of trans* identified folks. How is this an important part of your work?

We find trans*Buddhist sangha a tremendous support as it is a place to discuss the sticking points in dharma that we encounter that are unique to identity and trans* experience.

For instance, teachings on emptiness are often articulated as a call to renounce identity. One of us was in a retreat once where the teacher gave the instruction during a guided meditation to, “Forget your gender,” among forgetting other self identifiers. We know where teacher was going with this suggestion, encouraging us to drop our stories and unite our hearts in this base sense of interbeing, but “forgetting gender” has extremely different connotations for trans* people than for cis people. Most if not all of us are defending our existence as non-cisgender on a daily basis–with insurance companies who won’t cover our medical needs because we’re trans*, families who have a hard time accepting us, people calling us the wrong pronoun, navigating finding and holding a job where we are treated respectfully, and the list goes on.

Equanimity, or acceptance, is another teaching that may have particular implications for trans* folks, being that many of us are at odds with the body, name, gender categorization that we were given at birth and go to lengths to change them in order to be more at peace with ourselves as we walk in the world.

We believe that identity can be used to investigate, uncover, and remember our “true self” which is obscured by greed, hatred, and delusion. In trans* sangha, we can feel safer bringing up specific experiences that we might not feel comfortable sharing around non-trans* people and explore them as they pertain to our dharma practice. The spiritual path runs directly through our lives, and it’s really helpful to connect with people who may have similar experiences.

What are some simple things that teachers and other Sangha members can do to make trans* people feel safe and welcome in these environments?

It’s always great when someone is already familiar with trans* people’s issues, either because they’ve already known someone trans* or because they’ve educated themselves about it - this makes it much easier for us to openly share our experiences without having to explain ourselves. Reading books or websites is a great first step in terms of educating yourself about trans* issues - we’ve included some recommended reading options at the end of our guide.

When first exploring these topics, it may help to cultivate a “beginner’s mind” with regard to gender -  ask yourself a lot of questions. When were you first aware of your gender? How do you know that you’re not trans*? When you see a stranger and “know” that they are male or female, how exactly did you know that?

One of us has personally felt supported when other sangha members listened to his experiences and spoke up for him when he needed them to, for instance by correcting and educating another sangha member when they used the wrong pronoun. However, some people would prefer to be supported in other ways, for instance, they might prefer not to be spoken up for, but supported and encouraged in addressing the issue themselves. It’s best to check in with the person about what they’d prefer. You could say, “Sam, I noticed yesterday that James was calling you by the wrong pronoun. I’d be happy to speak up and correct people when they do that, but I wanted to check with you about what you’d prefer in those situations.”

Supporting trans* students’ practice and leadership development is also really important. There are few trans* Buddhist teachers that we know of in the U.S., so more need to be trained! Current teachers and community dharma leaders, please support trans* folks who express interest in deepening their practice in that way. Due to financial burdens with transition and other related life circumstances, trans* practitioners may struggle to afford classes and retreats. Retreat centers can keep this in mind when distributing scholarship funds, or have a set fund for LGBTIQ-folks in addition to other identity specific funds, such as for people of color and/or youth. Sangha members can also donate to their trans* friends if they are in need of help making it to a retreat.

Along with your guide, are there websites, films, books, etc that could serve as educational tools for sanghas?

Kate Bornstein’s “My Gender Workbook” is a great start for anyone who wants to think a little more deeply about gender by looking at their own gender. Janet Mock’s recent memoir, “Redefining Realness” was a great read as well.

Unfortunately, many film portrayals of trans* people are stereotypical and offensive, however, “A Self-Made Man” and “Southern Comfort” are both good documentaries that tell stories of trans men. “Gun Hill Road” is a fictional film about a young trans woman, although it should be noted that, like most media about trans* people, it focuses on the transition process, rather than other, equally important, aspects of trans* people’s lives.

For a more extensive resource list, see the Appendix of our guide.

What are your plans for the future of this trans*Buddhist project?

Thanks for asking! We want to focus on building community among trans*Buddhists, as well as continuing our work to help retreat centers become more welcoming toward trans* people. After our successful launch party for our Developing Trans*Competence guide and our workshop at the Philadelphia Trans-Health Conference, we want to continue to create spaces for trans*Buddhists to come together, both in person and online. To that end, we are planning to hold a trans*Buddhist meditation and discussion event in NYC this fall, and have created a group for trans*Buddhists on the Insight Timer app/website. In the future, we hope to have events to connect with other trans*Buddhists through events on Skype or Google Hangouts.

Founded in 2013, trans-Buddhist is a small collective of Buddhist practitioners from different traditions who seek to address systemic exclusion of transgender and gender nonconforming people from Buddhist spaces. Through their Developing Trans*Competence guide, their website, and in-person workshops, they work to support all sanghas in having the information and resources they need to be welcoming to trans*people. trans-Buddhist serve as a forum for trans* practitioners to receive help with challenges related to residential practice logistics and community-related issues.

trans-Buddhist believe that the refuge and connection available through shared dharma practice hold great healing power and are dedicated to making them more accessible. They recognize the interconnection of struggles experienced by individuals of all social identities, including races, classes, sexual orientations, gender identities, ages, abilities, cultures, and ethnicities. We stand in solidarity with and support other efforts to make Buddhism more inclusive in this country.

See more and download or purchase a print version of Developing Trans*Competence: A Guide for Meditation and Retreat Centers at  http://transbuddhists.org/.