Colombo, Sri Lanka -- When Dr. Ananda Guruge died a week ago, Sri Lanka’s Buddhist revival, which he chronicled, and its international spread, especially in the West, were reaching the desired heights. Beginning in the 1950s, yoga started to take hold among the white middle classes in the West to become today a key element of Western physical culture. Currently Buddhist vipassana meditation is following suit as both psychology theory and therapy. 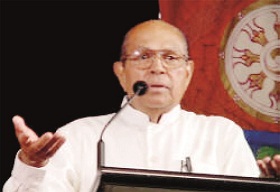 But amidst this success is a counter-narrative in that colonial field of anthropology which has falsified and vilified the Buddhist revival. For those who want to know about Sri Lanka, it is this fictional counter narrative amounting to around 40 books published in the West that provide a (wrong) window on us. And for students of the geopolitics of knowledge like the writer, the contrast could not be starker between the two narratives. In fact, it was the subject of the most recent communications that I had with Guruge. He wanted me to write a popular article to an American magazine contrasting the two narratives, but I demurred. So let this article be a small apology for my failure.

Let us begin with the Buddhist revival. In the 16th century, the barbarous Portuguese under direct instructions (through their papal Bulls) of the then Popes to destroy and conquer other lands had devastated almost all our Buddhist centres of learning. One of those Popes was Alexander VI who became a model ruler for Machiavelli. His papal bulls resulted in huge massacres around the world for which the more recent Pope John Paul II (1978 – 2005) apologised over 100 times. As the Portuguese historian/priest Queroz noted, the Sinhalese had then literally laughed at Christian practice and considered the Portuguese unclean not given to washing. But their laughter was stilled as under pain of death conversion was enforced.

Local Buddhists may have laughed but they did not kill Catholics who had under pain of death converted. In fact when they were later persecuted by the Protestant Dutch, our kings gave them refuge, just like when the Portuguese were hunting for the Muslims, they too were given refuge. The situation was different in East Asia where Buddhist/Confucian kings of Japan and Korea stopped Christian entry or killed the converts. The current Pope on his visit to Korea made saints of the killed converts. A recent Pope visiting Sri Lanka made Joseph Vaz a saint for his work from the Kandy Kingdom among our Catholics when the Protestant Dutch banned them. But so magnificent was Christian charity, that while previous Popes had apologised for the crimes committed around the world that visiting Pope did not apologise for the cruelty done to us.

The Catholic devastation was so strong that Buddhist learning had to be reimported in the 18th and 19th centuries from Siam and Burma where, in previous centuries, it had been transmitted from Sri Lanka. Although the Treaty of 1815 was to guarantee Buddhist practice, the British did not allow temples to emerge in the Western Province, especially Colombo till the mid-19th century. With a strong historical memory comparable to that of the Chinese and the Greeks, the revival was local and culturally inevitable. It was again this historical memory that made our Buddhist revival spread outwards to other parts of the world.

Guruge was a chronicler of this revival and an activist in it. His two collections of global correspondence from and to Sri Lanka in ‘From the living fountains of Buddhism: Sri Lankan Support to Pioneering Western Orientalists’ and ‘Return to Righteousness: A Collection of Speeches, Essays and Letters of the Anagarika Dharmapala’ provide nearly 1,500 pages of raw material for those interested in the revival. Not having seriously read this collection, our colonial anthropologists (I bought and read all their torturous writings) invented a fictional Protestant Buddhism for the revival. They claimed that Olcott and Blavatsky, two persons who were running away from Protestantism had introduced Protestant ideas to the revival. The situation was just the opposite as both arrived with intellectual begging bowls in hand. Blavatsky was mostly ignored and Olcott only used for the anti-colonial struggle, but rejected when he went against Buddhism and tried to infuse mystical theosophist ideas. Referring to the 1970 article by Gananath Obeyesekere, Guruge declared “Protestant Buddhism is an infelicitous term as it is misleading”.

But unfortunately, the rot set in as subsequent writers misinterpreted. Several of the uninformed like Jonathan Spencer embraced this Protestant fiction. Another, Tambiah, who wrote a book sponsored by Finland’s WIDER Institute that Dharmapala was “an uncharitable propagandist”. WIDER became notorious after a cover story exposure in Finland’s main newsmagazine of its then Sri Lankan head. He and his team left in disgrace. Kapferer wrote several negative books on us based unbelievably on just three Sinhalese having faith in exorcism.

Ven. Bellanwila Wimalaratne publicly despaired at the antagonism of H.L. Seneviratne to the revival. This was the period when anthropology was being denounced by Africans as a white man’s derogative view. It was also the period where the psychology of Freud was being denounced as fraudulent with, in the coming decades Buddhist meditative therapy accepted as effective. Unfortunately, it was also the period when Obeysekere was trying to look at our reality through Freud’s fraudulent theories.

But looking at the life work of Guruge as well as his publications, it is clear that his global impact was more through his activism than through his academic publications. As a recent Buddhist activist, he stands with others like the late Ven. Mapalagama Vipulasara and the earlier Ven. Narada who had a major impact on Asia. And the Ven. Bodagama Chandima is now following in the latter’s Asian footsteps.

After World War II — US political penetration with Christian fundamentalists following — Christianisation had begun in once Buddhist East Asia. It led to the demolition of Korean Buddhist temples. Allied to Buddhist forces in Korea, Ven. Vipulasara helped thwart this Christianisation. In Vietnam, a minority Catholic dominated government siding with France and the US worked against Vietnamese independence. Decolonisation prevailed and Ven. Vipulasara became a key figure in the new dispensation and later, after the Vietnamese freed Pol Pot’s Cambodia helped restore Buddhism there. And in today’s Vietnam, top leaders of the government openly declare that Vietnam is a Buddhist country. In Taiwan, a similar Christianisation project was underway when halted thanks to Ven Chandima and his supporters.

Meanwhile, Walpola Rahula’s ‘What the Buddha Taught’ with its many language editions gave the world an authoritative introduction to Buddhism. And Henepola Gunaratana’s Mindfulness in Plain English with over a quarter of a million copies sold, introduced meditation — higher Buddhist practice — to the West. These writings followed the pioneering efforts of the 19th century and early 20th century scholar monks documented by Guruge as well as of the Royal Asiatic Society which both together gave the world the first authoritative translations of Buddhist writings

Guruge’s activism started as a member of the then Ceylon Civil Service, when at the young age of 25, he was entrusted by the then government to organise the different activities of the Buddha Jayanti. This was a seminal event in the recovery of Buddhism on the global stage. It stands with the Panadura Vaadaya, Anagarika Dharmapala, the writings of the scholar monks especially through Vidyodaya and Vidyalankara (Guruge wrote a long article on them) and the establishment of various Buddhist organisations by G.P. Malalasekara and D.B Jayatilaka (on the latter, Guruge wrote a book). Guruge wrote of the various international figures influenced by Vidyodaya and Vidyalankara and the implied introduction of free education through Vidyalankara.

In the coming months, both India and Sri Lanka are to issue commemorative stamps on Dharmapala. Guruge would have been pleased. Anagarika was not only the father of international Buddhism that Guruge documented but also of the dalit movement among South Indian Tamils (Dharmapala called them Aryans). It eventually turned into the chauvinist DMK. And Dharmapala, in contrast to Gandhi was a proponent of industrialisation.

Surprisingly, I discovered that most of Guruge’s publications were not through regular academic publishers, but unfortunately self-published. Pity, such a knowledgeable and erudite man who spoke eloquently without notes should have been better known in international academia. It would have countered the anthropology fiction on the Buddhist revival that is taught even in our universities which came out of the revival. Guruge has extensive documentation for our ignorant anthropologists.