New Delhi, India -- Sunita Dwivedi is a successful writer, and her book “The Buddhist Heritage Sites of India,” published in 2005 had a foreword by The Dalai Lama. Its Russian translation was released in Moscow by Ocean of Wisdom Publications in 2012. 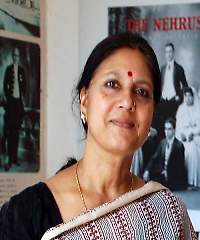 The next one on “In Quest of the Buddha: A Journey on the Silk Road” was published in 2009 and released simultaneously in Kathmandu and Delhi. The third one, “Buddha in Central Asia,” was published recently in September, 2014 and is on the stands. Sunita is not a Buddhist. She just happens to love the Buddha.

Her first book takes the reader through the better-known sites of Uttar Pradesh, Bihar, Sikkim, Arunachal Pradesh, Ladakh, Himachal Pradesh, and even across the borders to Nepal – covering the entire Dhamayatra of the Buddhist circuit. She has been traveling all over South Asia and Central Asia to document archeological spots related with Buddhist history. She is moved with the hospitality of Central Asia and spellbound with the beauty and grandeur of Samarkand—the Jewel of Central Asia. She wishes to spend her whole life in Samarkand.

Question: Sunita you are not a Buddhist, so then why do you have such deep and great love for Buddha and with Buddhist history? Is it normal or something metaphysical?
Answer: I am not a Buddhist and I even do not know when Buddha walked into my life. As a child I often wandered barefoot through fields and jungles of saal trees to the Ramabhaar Stupa lying about a kilometer away from my house in the village of Kushinagar, where I was born. I used to play at the giant mound of bricks where the Buddha was actually cremated two thousand years ago. The Mahaparinirvana Buddha image made a profound impression upon me. The serenity and loveliness of his face simply fascinated me.

Can you imagine that as early as the 6th century BC, thousands of women had joined the Buddhist Sangha? They were mostly householders and lay devotees. What was it that attracted them to the Sangha? What was it that once lured the whole of Asia to Buddhist thought? Was it not the spirit of tolerance, of peace and liberation, of the logic of the Middle Path that taught people to avoid all extremes, and of the Eight Fold Path for right behavior? The attainment of Nirvana, the freedom from attachments is a powerful idea even for non-Buddhists.

To assimilate the practice of fusion against division, of peace against violence is the need of the world and Buddhist thought transcends the barriers of cultural and ethnic differences.

Q: When, how, and why did the idea of compiling Buddhist remains and routes come into your mind?
A: We can see that Dhammadutas and Mahamatras of emperor Asoka in the 3rd century BC, scholars and translators of Buddhist texts, monks and pilgrims, all travelled with trade caravans along ancient routes, called the Silk Routes, to spread the message of the Buddha. As the religion spread in Asia stupas and monasteries came into existence along these routes.

It was logical while covering the Silk Routes through China and Central Asia that I should see the remains of crumbling monasteries that seemed unable to fight the forces of nature. They existed precariously on mountain tops, in the Gobi and Taklamakan deserts, along rivers and in the steppe lands of Central Asia.

Q: Tell us something about your last book.
A: My first book ‘Buddhist Heritage Sites of India’ (2005) is an account of my Dhammayatra in the footsteps of the Buddha in the land of his birth and enlightenment viz. Lumbini, Bodhgaya, Sarnath, Kushinagar; the famous rainy season retreats of Vaishali, Rajgir, Sravasti, Kaushambi; and the Himalayan monasteries of Rumtek, Tawang, Tabo and those in Ladakh region. The second book In Quest of the Buddha- A Journey on the Silk Road (2009) deals mainly with my travels along the Silk Road in China and the Buddhist sites that came up along the trade routes from Xian through Dunhuang to Urumqi; sites in the Taklamakan and the Gobi deserts; and those in the provinces of Sichuan and Tibet.

Q: Would you like to share content from your latest book, “Buddha in Central Asia?”
A: My latest book, third in the series of historiographical travelogue was published in September, 2014. It describes the monastic sites of Central Asia that once reverberated with chants of monks, but are now gradually merging into dust. Soon they will become a thing of the past. I have recorded my journey into the past that still lingers on in the crumbling ruins. You can find this book published by Amazon to click this link.

Q: Where have you been in Central Asia?
A: I travelled from Kabul in Afghanistan to Kayalik in Kazakhstan covering all neighboring countries of Tajikistan, Turkmenistan, Uzbekistan and Kyrgyzstan.

Q: What is your opinion about Central Asia as a tourism destination?
A: Many places in Central Asia are hot tourist spots. The Paghman Darreh and Bagh-e-Babur of Kabul, the painted caves of Bamiyan, the marble city of Ashgabat, Dushanbe where the National Museum of Antiquities houses the largest Buddha of Central Asia, the medieval monuments of Bukhara and Samarkand, the historical museums of Bishkek, the nature reserves of Almaty and the Buddhist sites of Xinjiang are all top tourist destinations. But it is difficult to get a visa to visit Central Asia although most have contiguous borders with Pakistan and India.

Q: What is your opinion about Central Asian hospitality?
A: Central Asia is a lovely place to be in. Even though you may not know Russian or local languages you will still understand what people are speaking. There is a special bondage between Pakistan, India and Central Asia historically and culturally. As soon as you say you are from India or Pakistan people flock you in bazaars. They are extremely welcoming. Even as you enter a shop and buy nothing you are always greeted with freshly cut melons, bunches of black and green grapes, dry fruits and black tea. All this for free.

Q: What place do you like most?
A: That is difficult to answer. I was fascinated by many places-the ancient caravan serais and bazaars of Bamiyan, Old Bukhara and the Registan of Samarkand, the Blue city of Mazar-i-Sharif, Bishkek-the Switzerland of Central Asia and of course the hills and nature reserves near Almaty.

Q: Any particular incidents on your travels in Central Asia?
A: I cannot forget my travels from Kabul to Mazar-i-Sharif. On advice of my friend Fauzia Wardak I packed a burqa as we would have to trudge into the remote villages of the northern province of Afghanistan where one has to observe the local tradition of wearing the hijab. So Fauzia and I clad in long burqas over our salwar kameez and heads covered in black scarf scurried in and out of Aibak where I was in search of the Naubahar monastery. That was the first time in my life, I wore the burqa and covered my face even as I circulated along the pradikshana path at Takht-e–Rustam.

Q: If you have free time and you are not writing a book, would you like to visit Central Asian countries and where would you like to spend your maximum time?
A: I could live all my life in Samarkand, the beautiful city of Timur and spend hours gazing at the architectural wonders of Sher Dor and Ulughbeg Medrassas and the brilliance of the Tillakari mosque at the Registan Square.

I would love to spend more time in the Archaeological Park of Ancient Merv in Turkmenistan which is dotted with dozens of ancient and medieval settlements. Here one can find camels carrying decorated tents on their back to take tourists from one settlement to another inside the desert. Also I dream of another, perhaps a last chance to search for the Buddhist monastery of Gyaur Kala that I could not locate inside the deserts of Merv.

Q: Have you seen Muslim cultural heritage and monuments in Central Asia or are you just concentrated on Buddhist monuments?
A: I saw more Islamic monuments than Buddhist. Many times I prayed at the mausolea of Sufi saints and in mosques. Prominent among these were the Blue Mosque in Mazar-i-Sharif, the Ruhi Masjidi near Ashgabat, the Kalon Mosque in Old Bukhara, Juma Masjid at Ichon Kala in Khiva, Khoja Akhmed Yassavi’s mausoleum at Turkistan which is also called the second Mecca for Muslims, Arslan Bab mausoleum at Otrar, the Dungan Mosque at Zharkent, etc.

The medieval Muslim monuments of Central Asia with their splendid calligraphic art, amazing inlay work and architecture are a source of great pleasure. I also happened to see the holy 7th century AD Othman Koran at the Khast Imam Square in Old Tashkent. And countless more Islamic monuments whose spiritual magnetism is irresistible.

Q: What is your opinion about Pakistan and Pakistani people?
A: I have travelled by road from the Wagah Border through Lahore, Gujrat, Rawalpindi, Islamabad, Peshawar and Mardan. In no country of Asia was I welcomed with such warmth that I felt while I was in Pakistan. I was there at a time when thousands of anti-government protestors were on the streets. Tear bombs were exploding and politicians were crying hoarse. Rivers were rising and inundating thousands of villages. Everyone around me in India was drilling fear into me. But when I reached Islamabad I saw that normal life was in full swing and there was no scare among the people. All was calm and quiet except inside the limited area of the Red Zone of the Parliament. I found Lahore cleaner than Delhi and was told that streets in Lahore were washed at night. The campus of Punjab University was a canopy of flowers and amazingly clean. I happened to travel on the M1 and M2 Motorway and found it so grand.

Q: What do you wish to share with our readers?
A: The need of the hour is the propagation of peace and prosperity of nations through preservation of our common cultural heritage and a peaceful development of our societies. This will go a long way in focusing on education, health and infrastructure development. In present times the ‘Middle Path’ of Buddhism assumes relevance so that the path of extremism is avoided for resolving issues- internal or external.

Q: Tell us more about you and your journey of life.
A: A post-graduate in English Literature from Lucknow University and Masters in Education from Allahabad University, I continue to study Ancient History at Jiwaji University, Gwalior. I have been a journalist by profession, having worked in several dailies including The Times of India, The Hindustan Times, The Pioneer and Northern India Patrika. I left a full time job in 1997 to pursue my passion for travelling and photography on the Silk Road through Asia and Europe. For almost two decades now I have been retracing the Silk Road through China, Central Asia and India. I was recently in Pakistan to see the cities along the Grand Trunk Road and write about the Buddhist heritage of Pakistan.