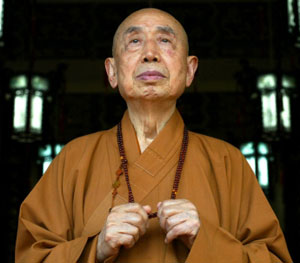 The Buddhist community is mourning the loss of the city's leading monk, Sik Kok Kwong, who died yesterday aged 95.

Chief Executive Leung Chun-ying expressed his "deepest condolences" to the relatives of Kok Kwong. "The Most Venerable Kok Kwong had made tremendous contributions in promoting Buddhism, providing charitable services and enhancing social harmony," he said in his statement.

Secretary for Home Affairs Tsang Tak-sing lauded his achievements in promoting Buddhism and his decades-long effort to persuade the government to declare Buddha's birthday a public holiday. In 1999, the eighth day of the fourth lunar month was made an official holiday.

Born in Liaoning province in 1919, Kok Kwong became a monk in Shanghai when he was nine and came to Hong Kong in 1939 after fleeing the Japanese.

While president of the city's leading Buddhist group, a position he held until his death, the association built hospitals, schools and provided various social services to the community.

Before the handover, Beijing appointed Kok Kwong a member of the Basic Law Drafting Committee and the Preparatory Committee for the HKSAR as well as an adviser on Hong Kong affairs.

But some felt Kok Kwong had become too close to those in power. He was caught up in a controversy last year amid accusations that Tsz Shan Monastery, of which Kok Kwong was chairman of the board of directors, was built to be the final resting place of Li Ka-shing, Asia's richest man.

The Tai Po monastery was built with sponsorship from Li and features a dormitory block with bulletproof windows and doors, and three rooms strong enough to withstand an explosion. This led to speculation that it had been tailor-made for Li.

In 2007, after a crackdown on monks in Myanmar that ended in bloodshed, Kok Kwong issued a stern condemnation of the junta and said those responsible would go to the lowest echelon of hell.

Some months after the 500,000 turnout for the July 1 march in 2003, Kok Kwong made a controversial call on people not to take part in the protest. He told the South China Morning Post: "It is best if we Buddhists don't participate in politics, and there would be peace. None of us should participate in things like demonstrations."