Philadelphia, PA (USA) -- As an undergraduate, Chair of the Religious Studies department Justin McDaniel, a preeminent scholar of Buddhism, had never studied the subject before. After volunteering in Thailand and Laos, he was inspired to explore the Buddhist culture, even becoming a monk himself. 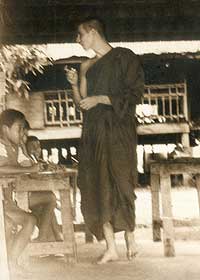 McDaniel’s affinity for South Asian culture began with his volunteer work teaching English and citizenship to Cambodian refugee communities. After learning about the genocide in Cambodia and developing relationships with the people he taught, he was inspired to volunteer in Asia.

While in Thailand and Laos, McDaniel taught English, as well as AIDS and HIV prevention education, in a small town while working with schools for disabled students on the side. Because the majority of these countries’ populations are Buddhist, McDaniel was able to learn firsthand about the religion.

“I got more and more interested in their religion and culture, problem-solving methods and interpersonal relationships … everything that religion touches upon,” McDaniel said.

Most Thai men go on to become monks for a short period of time, so it was only natural that McDaniel, who had made many Buddhist friends and immersed himself in Buddhist culture during his stay in Thailand, became one as well.

McDaniel describes his experiences during the monastic life as challenging but liberating.

“It sounds difficult because you eat once a day, you don’t have any possessions, you have to shave your head and eyebrows ... you’re living in the jungle,” McDaniel said. “You take away the pressures [of the outside world] ... you concentrate on doing the task at hand ... and it gives you time for introspection, learning how to work with others and how to serve others.”

“We spend so much of our lives on focusing on ourselves ... The lifestyle makes service and dedication easier,” he added.

McDaniel said that the monastic lifestyle also helped him develop priorities as a teacher.

“Teaching is a wonderful vocation but you have a lot of responsibility to students. It is important to show that education is not just a series of accomplishments,” he said. “Education is learning who to rethink, learning to question ourselves and learning how knowledge and service go together.”

McDaniel’s most well-known class, “Living Deliberately: Monks, Saints and the Contemplative Life,” brings his monastic experience to Penn. Students in the religious studies course observe a code of silence, abstain from using all electronic communications and limit their spending to $50 a week. They also practice celibacy for a month and keep journals, in which they write down what they were doing every 15 minutes.

College sophomore Carolina Beltran, who was inspired to major in religious studies after taking classes with McDaniel, said that his values are evident in McDaniel’s classes.

“He challenges us to think differently,” Beltran said. “He says ‘I’m giving you this, but I want you to think outside of the box.’” She described McDaniel as humble, grounded and approachable despite his distinguished position, adding that he has an evident passion for what he does.

Another of McDaniel’s students, College and Wharton senior James An, agrees.

“He is extremely passionate about what he does and anyone who enters the classroom can see that,” An said. “He’s more than a professor.”