Buddhist priest Bill Wright gives up flat and job to go on 1,000 mile pilgrimage around Japan

Gloucester, UK -- After years spent working to help people with mental health issues, Buddhist priest Bill Wright is giving up his job and home to take on a 1,000 mile pilgrimage around Japan. 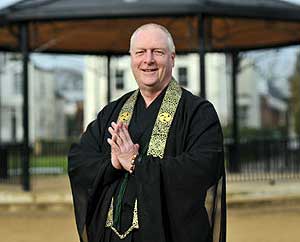 Bill, who lives in Park Road, Gloucester, was ordained as a Buddhist priest 17 years ago after being introduced to the religion by an old friend.
Advertisement

“I hadn’t seen her in a while and she was completely bald so my initial thought was that she was sick,” explained Bill, who was given the Buddhist name Tenjo, which means ‘radiates heaven’.

“She explained that actually she had joined a temple in the city and invited me to go along with her.”

Bill is part of the Shingon school of Buddhism – one of the major schools in Japan.

Priests who are part of this school are expected to do a 1,000 mile pilgrimage around Shikoku Island in Japan, and in March Bill will be giving up his flat and job at Wotton Lawn Hospital in order to take part.

Several hundred thousand people travel to the island, which is the fourth biggest in Japan, for the pilgrimage which involves walking to the main 88 temples on the island.

It is estimated to take about 45 days but Mr Wright has given himself six months to travel around the island and will be taking only basic supplies including a tent to sleep in.

“Priests are welcome to stay in the temples but during the summer months they can get quite full,” said Bill.

“Fortunately the people who live on the island actually put out food and lanterns for the priests on the pilgrimage so I should be ok just popping up my tent along the route.”

Bill will be flying out from London on March 30 and heading to Japan where he will take a six hour bus to the island.

As well as his desire to do the pilgrimage as part of his practice, he also wants to raise awareness of the work done at Wotton Lawn where he has worked as an occupational therapist for the last three years.

“Hospitals by their nature create patients and they become institutionalised,” he said.

“Occupational therapy helps turn them back into people again and helps them to maintain their social skills while they are in hospital.”