What Buddhist Teacher Pema Chödrön Learned After A 'Traumatizing' Divorce

San Francisco, CA (USA) -- Before Pema Chödrön became a world-renowned Buddhist teacher and best-selling author, she had what she calls a "conventional" life and marriage. Then, one day, her entire world came crashing down in a matter of seconds when her then-husband blurted out that he wanted a divorce. Chödrön recalls it being one of the most devastating moments in her life, but looking back, she now understands it was also one of the most profound. 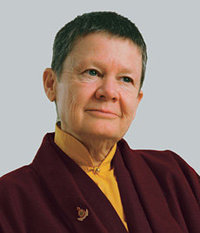 It was the 1970s, and Chödrön, born Deirdre Blomfield-Brown and raised on a New Jersey farm, was living with her second husband in northern New Mexico. She still has a very clear memory of the day he dropped the bombshell, as she tells Oprah in the above video from "Super Soul Sunday."

Back then, Chödrön had been sitting outside her adobe-style home, quietly sipping her tea when her husband of 8 years pulled up in his car.

"I heard the door slam. [He] came around the corner of the house and just said it... 'Things haven't been going well with us. I'm having an affair with somebody else, and we need to get a divorce,'" she says.

The statement left Chödrön reeling. "It was so shocking -- I suppose even traumatizing," she says. "It was just [a] timeless moment of total, eternal silence."

Even though Chödrön could admit that their relationship had been rocky, she still clung to the idea that they could make it work. "Everything fell apart. I just somehow couldn't get it all to come back together," she says. "I wanted it to come back together, because, for me, happiness seemed to represent just going back to what I had had... It represented security."

Instead, Chödrön found herself facing the terrifying unknown. It took her several years to move through her grief, but once she did, she came away from the experience with a major life lesson.

"I didn't realize how attached I was to having... somebody else confirm me as being OK," Chödrön says. "In other words, it didn't come from inside me. It came from someone else's view of me."

This is why Chödrön looks back on her ex as having made a positive impact on her spiritual journey.

"He was one of my greatest teachers because he left me," she says. "That's the simple truth."