A spiritual teachers long and winding road from Baptist to Buddhist, New York to Utah

Salt Lake City, Utah (USA) -- In his search for truth, the teacher, religious leader, husband and father finds enlightenment, meaning and a mission — to rise above himself and lift others. 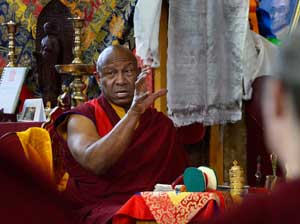 The first thing people want to know about the handsome black man, with the deep bass voice, shaved head and one shoulder poking out from saffron-and-maroon robes, is what to call him.

At Salt Lake City's Urgyen Samten Ling Temple, he has been known as "Lama Thupten Dorje Gyaltsen," or "Lama Thupten," for short, but recently was elevated to the honorific position "Rinpoche."

His adoptive parents named him Jerry Allen Gardner, so at the University of Utah he is known as "Professor Gardner." To his wife, he's just "Jerry."

The next question is how a 67-year-old Guam-born, Selma-bred, fast-talking former Baptist from the mean streets of New York City ended up as an orthodox Buddhist in Mormon-dominated Utah.

And last, why would a guy immersed in bedrock beliefs about life's transitoriness anchor himself to the Beehive State for more than two decades, yet feel most at home in the mountains of earthquake-prone Nepal?

The answers to these puzzles are as multifaceted as a Tibetan mandala — or as the man himself.

"I am only a servant," the lama-turned-rinpoche says modestly, sitting cross-legged on a raised platform in his temple's office. "Any redeeming qualities or values I may have come through the kindness and blessings of my teachers."

They taught him, he says, to keep his feet on the ground and not get a big head because of a title, to seek compassion and vision, to be a catalyst for good in other people's lives.

That's not so different, though, from what he learned in a faraway time and place at the feet of his parents, grandparents and "aunties."

Truth be known, he says, he always felt a bit like an outsider.

Baby Jerry was born on a U.S. military base in Guam in Micronesia to unmarried parents who immediately gave him up for adoption to another military couple, Willie Lee (mother) and Willie Gardner (father).

"I was part African-American, part Portuguese, and part who-knows-what-else," Gardner says with a laugh.

The Gardners lived in mid-1960s Alabama, where their only child witnessed signs of racism: KKK crosses burning on lawns, segregated drinking fountains and seating for blacks in the backs of buses.

And that bridge in Selma, where civil-rights protests took place? He knew it well.

At his Baptist Sunday school, Gardner recalls, "I was the kid in class who asked odd questions."

He was also a child who could see the future, he says, and witnessed "visions in the sky."

Times were tough, though, and Gardner's father kept getting sent on various military assignments, so the young boy was shipped off, first to grandparents, then to aunts and uncles in New York City's black neighborhoods — that is, "the projects."