Hong Kong, China -- Shyalpa Tenzin Rinpoche was in the middle of a media interview in Hong Kong when a 7.8-magnitude earthquake hit Nepal on April 25. 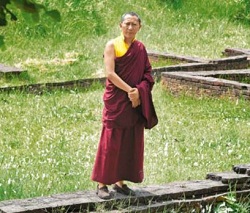 << Shyalpa Tenzin Rinpoche, an eminent Buddhist teacher, believes that when people recognize life as precious and do not take it for granted, they will start treasuring every moment of it. Photo: HKEJ

As news of the tragedy arrived, the renowned Buddhist scholar and teacher felt an urgent need to return to his country, but all flights had been canceled.

He thought he could help by staying put in Hong Kong. With the help of friends, he organized a fund-raising dinner that was able to collect a substantial amount for victims of the disaster.

“I have to utilize all people and resources possible to buy food and tents for eight villages. Our people have been conducting relief work in those areas,” he says.

His group is now building houses in the affected villages.

The April 25 earthquake was the worst to hit the nation in decades. It was followed by a series of strong aftershocks and another major tremor on May 12.

Nearly 9,000 people were killed and 22,000 were injured in the disaster. Whole villages were wiped out and centuries-old temples and cultural edifices crumbled.

The earthquake also triggered an avalanche on Mount Everest, the world’s highest peak, killing more than a dozen climbers and sherpas.

Rinpoche deeply felt the tragedy of his people for he intimately knows the temples and villages that were destroyed in the disaster.

He constantly prays for his people to overcome the tragedy and strive towards self-renewal.

Rinpoche was born in a village in the foothills of the Himalayas.

He was told by his grandmother that when he was a young boy, she took him to the temple. There, without being told, he did the Anjali Mudra, pressing the palms of his hands together in a gesture of salutation to the statue of Buddha.

Rinpoche didn’t think much of it, but his grandmother believed it was a sign of his special calling.

True enough, at the age of four, he was recognized as a “holy child”, and thus began his intensive training in Buddhism and meditation under the guidance of spiritual leaders and monks.

He remembers that as a young boy, he occasionally felt the pangs of envy when he saw other children playing in the field, while he was studying Buddhist texts by the window.

For the past 25 years, Rinpoche has been traveling around the world promoting Buddhism, giving speeches in prestigious universities such as Harvard, Yale and the Wesleyan in the United States.

He lives in Nepal and New York. He got married in New York in 2003, and now has three children. He says he immensely enjoys the life of a family man.

It is a common belief that Buddhist monks are vegetarians and celibates. But Rinpoche explains that they are not allowed to get married only during the period of abstention.

In fact, they can eat all kinds of food. He himself is a coffee lover, having imbibed some of the influences of American culture.

Nonetheless, Buddhist monks and nuns avoid eating meat to remind themselves of the Buddha’s teachings on the need to value and protect life.

Rinpoche also says it is a must for Buddhist monks to dress in traditional religious robes to maintain their image as spiritual leaders in religious settings, but that doesn’t mean they can’t wear other clothes.

He shows pictures of himself wearing his favorite orange polo shirt during a “life release” ritual.

He says “life release”, which involves setting an animal free, is important in the life of a Buddhist. It is also efficacious in petitioning for divine assistance or even a miracle.

When he was still studying in the university, he was diagnosed with tuberculosis. His parents also fell ill and were confined to hospital.

“I insisted on practicing life release as it was the only thing I could do for my beloved parents. My friends helped me by setting some fish free.”

Soon enough, he recovered from his illness, and his parents, too, were released from the hospital.

Since then, Rinpoche has promised himself to do whatever he can to save lives.

He says he constantly prays for others and offers counselling to help people live happily and fully.

Rinpoche has been appointed by the Nepalese government to establish the Mahasiddha Sanctuary for Universal Peace in Limbini, a pilgrimage site in the Rupandehi district of Nepal and considered the birthplace of Buddha.

The institute is conceived as a “temple of peace” that will sow and nurture “seeds of tolerance and understanding in the hearts and minds of people around the world”.

It is expected to be completed in four to five years, becoming a spiritual site for all peoples, regardless of ethnic background or religion.

Rinpoche believes that when people recognize life as precious and do not take it for granted, they will start treasuring every moment of it. Such recognition also leaves no place for terrorism.

For the past 10 years, Rinpoche has frequently visited Hong Kong. In 2009, he set up a charitable organization, the Wencheng Gongzhu International Foundation, in the city.

He usually stays in Hong Kong only for one or two days for each visit, but he remembers quite well last year’s Occupy protests.

“I was living in Wan Chai at that time and I saw a lot of tents in the neighborhood,” he recalls.

Asked what he thinks about the political tensions in the city, Rinpoche says society should strive to reach a consensus with all parties exerting sincere efforts to resolve the issues at hand.