Wimbledon 2015: Novak Djokovic and the Buddhist temple minutes from Centre Court that helps him maintain his winning ways

London, UK -- Shortly after stepping off Wimbledon’s Centre Court on Friday, where he recorded yet another comfortable straight-sets victory, Novak Djokovic was asked what goes through his mind when he plays. His reply was telling. 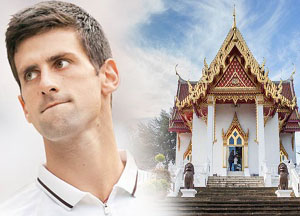 << The Buddhapadipa Temple is regular refuge for the world No 1

“I try to put myself only in the present moment, not fight against the thoughts and the pressure and the excitement, but just acknowledge them and be aware of present thoughts but also try to keep my composure and calm,” the defending champion said. “I try to just be in the moment and enjoy.”

Djokovic is often regarded as one of the sport’s strongest players when it comes to mental toughness. It is a technique he has refined through meditation and, when he is at Wimbledon, he uses a nearby Buddhist temple as his refuge.

The Buddhapadipa Temple is on a leafy suburban street only a five-minute walk from the All England Club. Djokovic, who has been using the four-acre site for quiet contemplation for several years, is its most famous visitor.

“We’ve known him for quite a while now,” said orange-robed Phramaha (“Great Monk”) Bhatsakorn Piyobhaso, sitting on a bench overlooking the temple’s lake. “Novak came here on his own. He just walked in and said hello to the people here and went on to meditate on his own.”

Staff at the temple, which has been on the site since 1976, recognised the Serbian player but they try not to bother him when he comes to mediate, usually early in the morning when the grounds are quiet. He is respectful of the surroundings but does not speak to the monks.

“Sometimes he asks our staff to open the main temple for him, so he can get inside and sit still for a while there,” said the Phramaha, one of seven Buddhist Monks who live there full time. “I think he’s learned how to meditate on his own. He walks around the temple and spends one or two hours alone. He just comes to the temple to enjoy nature, the peace and the beautiful environment. ”

It is easy to see why the world  No 1 chooses to visit. Beginning at a red bell tower, a shady walkway weaves between trees and across several arched wooden bridges before ascending a grand, white staircase to the red-and-gold temple overlooking the site.

Inside are intricate murals and a floor strewn with Buddha statues and candles. The temple is so close to the All England Club that cheers can be heard, perhaps allowing the Serb to visualise his own victory.

Arranged along the path are a series of wooden signs engraved with Buddhist teachings. “One should not pry into the faults of others, into things done and left undone by others. One should rather consider what by oneself is done and left undone,” reads one. “Though one may conquer a thousand men in battle, the one who conquers himself is the greater warrior,” another says – or in tennis terms: concentrate on your own game.

Professional tennis players often say the best way to play is point-by-point, rather than worrying about the set just lost and the mountain to climb. According to the Phramaha, meditation is helpful for this as it focuses the mind on solving “the problem in front of you”.

“I think meditation helps him to develop concentration: to keep focused, especially when playing tennis,” he says of Djokovic. “Just focusing on the now: that’s the benefit of meditation.”