Wales, UK -- The Welsh Buddhist activist, poet, and teacher, Ken Jones (1930-2015) passed away on August 2nd. In his farewell message to Gaia House this year he spoke about his prostate cancer. 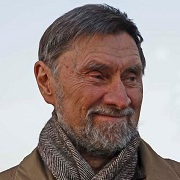 Jones was an important voice in socially engaged Buddhism and was the founder and later president of the UK Network of Engaged Buddhists and a member of the International Advisory Committee of the Buddhist Peace Fellowship.

His final years were spent in Wales with his Irish wife, Noragh.