Orange County, CA (USA) -- The Venerable Robina Courtin has led many lives. At 70 years old, she’s been a Buddhist, a Catholic, a musician, a political activist, a radical feminist, a martial arts expert, an advocate for prisoners and even one of the Dalai Lama’s personal bodyguards. 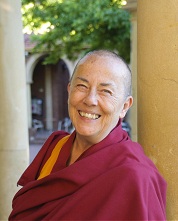 A native of Melbourne, Australia, Courtin, who was ordained as a nun in 1977, now teaches people how to understand their own minds.

On Friday, Courtin will speak at the Neighborhood Congregational Church in Laguna Beach on the subject of “Becoming Your Own Therapist.”

Earlier this week she spoke with the Register about her life experiences and how people can access clarity and peace through the practice of focus and meditation, giving themselves the therapy they need.

Q. What drew you to Buddhism?

A. I was born to a Catholic family and went to a Catholic convent. I was quite naughty as a kid. But I always pondered the meaning of life. I had a lot of questions. In the 1960s, I went to London to study music. But, at the time, I was ripe and ready for revolution. I became a political and social activist and a radical feminist. But as time went by, I started looking toward the spiritual. My first exposure to Tibetan Buddhism was through a retreat in Queensland, Australia, in 1976, held by two Tibetan Buddhist lamas.

For a feminist, the patriarchal structure of Buddhism came as a cultural shock. It was also a shock to find out that according to Buddhism I’m responsible for my suffering when I really wanted to blame everyone else. But, I went past those obstacles because I really wanted to learn about this philosophy that doesn’t talk about a creator, but the law of karma. I was really struck by Buddha’s teaching that you don’t just believe in something, but analyze it for yourself and use your own intelligence to determine what’s true. It wasn’t all about blind faith, and that really appealed to me.

Q. How did you get involved in martial arts?

A. I trained in three systems – Korean, Japanese and Chinese – the most recent being in the late 1980s when I was working for Wisdom Publications in London. I loved the martial arts. It suited my nature. I didn’t advance to a high level, but I found it very beneficial for my mind. I hugely appreciated the discipline and the focus.

A. I was a part of the Dalai Lama’s team of 10 bodyguards during his six-week tour of France, Italy and Spain in the fall of 1982. What really blew my mind was how charismatic and humble he was. I was able to see the way in which he touched people’s lives. I watched him in a monastery in Spain where the Catholic monks were blissed out just talking to him. He is so down-to-earth and, yet, extraordinary. It was truly a great experience.

Q. You have studied and now teach Buddhist psychology. What is unique about it?

A. It’s the Indian tradition of psychology that is more than 3,000 years old. It is this astonishing investigation into the nature of the self. The Indian yogis created this technique using focus and meditation to go to the subtlest level of their own minds. At that level, you have a substantial level of clarity. It’s a sophisticated, intelligent analysis of the cognitive process.

Q. How can someone use this technique to understand the workings of his or her own mind?

A. In modern psychology, we talk about emotions such as anger, desire and jealousy. In Buddhist psychology, these are said to be the causes of suffering. Through meditation and focus, we develop the ability to delve deep into our mind, listen to the cognitive stories and conceptual dramas in there, unravel them and steady the mind. That’s how you become your own therapist. We can reprogram our mind by learning to listen to the good parts of ourselves. But it’s a hard job and it is very hard work.

Q. What’s an example of a “conceptual story?”

A. Let’s say you and I have a fight. My eyes are wide, I’m shouting and there’s spit coming out of my mouth. The words, my facial expression and the spit are all concepts shown by the emotions, in this case anger. We weave these conceptual stories of someone being bad or evil based on our emotions. And then, we start believing those stories to be true. This is actually a part of the process of letting go. When you look into your own mind and remove those negative emotions, you are learning to control your behavior and be reasonable. This is much more than religion or faith. Anybody who practices any religion or even no religion can use these skills.

Q. What’s the goal of this exercise?

A. In Buddhism, the end goal is to get rid of all suffering or to achieve a state of nirvana. In Mahayana Buddhism, which I practice, there is a saying that a bird needs two wings to fly – wisdom and compassion. When you put those two together and pull yourself together, you find yourself in a position to help others.