Edmonton, Canada -- I’m drawn to the philosophy of Tibetan Buddhism, which inspired my new book Back Over the Mountains: A Journey to the Buddha Within. 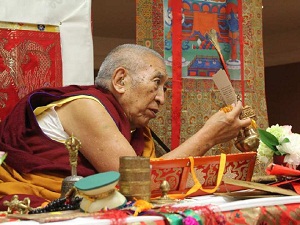 For the past seven years I’ve been devouring books about meditation and yogis in Himalayan caves. I’ve travelled twice to Nepal in search of sacred places and wise teachings. But last weekend all I had to do was drive to the Varscona Hotel on Whyte Avenue.

The Venerable Thrangu Rinpoche — born in Tibet in 1933 — was in town giving weekend teachings at the request of Karma Tashi Ling Buddhist Meditation Society. He resides in Nepal and is a world-renowned Buddhist master.

I visited several of his projects during my trips to Nepal, including Shree Mangal Dvip Boarding School, which educates Himalayan children. But I’d never met him in person, so I was thrilled to hear of his arrival in Edmonton.

Rinpoche is a term that means precious one, and it is given to teachers who guide individuals to develop their innate wisdom and compassion.

The Dalai Lama appointed Rinpoche as the personal tutor to the 17th Karmapa (head of the Kagyu lineage of Buddhism). In the late 1970s Thrangu Rinpoche began giving teachings in the West, sharing Tibetan Buddhism with a whole new culture.

I find it inspiring that Thrangu Rinpoche teaches from an unbroken oral lineage that extends right back to the time of the Buddha, handed down from master to student for millennia.

Last weekend began with a talk on compassion, followed by a teaching of the Dorje Chang (Vajradhara) prayer, which is integral to the Kagyu stream of Buddhism, and concluded with a Manjushri empowerment. The empowerment wakes us to our own inner wisdom and intellect, which we can then carry with us out into the world to help others.
The Four Reminders

Thrangu Rinpoche spoke to the group about the four reminders, which help inspire students to meditate and practice. They are:

We should use our lives for something meaningful and inspiring.
Everything in this world is always changing.
The law of cause and effect.
In samsara (the repeating cycle of birth, life and death) we are stuck in a cycle.

What stood out most for me from the weekend was Thrangu Rinpoche’s smile and his compassion. He’s almost 82 years old and still travels the world to help those who need meditation advice and encouragement.

I watched as he gingerly climbed down from his raised seat, and how his attendants helped him put on his shoes and adjust his robes.

It can’t be easy to sit on airplanes, address hundreds and sometimes thousands of students who speak a different native language, and deal with jet-lag while imparting ancient wisdom teachings that inspire us to become the open, awake and kind human beings we have the potential to be.

His kind compassion will stay with me.